Note: This article follows the previous article – Movie review – How is it done? in which Raunak has talked about how a good review is written. In this article, Raunak is analyzing some Nepali movie reviews.

At the time when Hindi movie Ravaan featuring Avisekh Bacchan and Aiswarya Rai was released (June 18, 2010), Nepali daily Kantipur published a review of the movie after a few days of the release. The review mentioned that the movie also featured Manisha Koirala and Govinda. The article appreciated their role even if they appeared briefly in the movie. I had watched the movie on June 19 (before the review was published) so I had to ask a friend for the DVD of the movie to confirm the error in the film review. There was no mention of Manisha in casting and she never appeared in the movie.

At the time when another Hindi movie, Rajneeti, was released the same newspaper published a negative review of the movie. The Bollywood movie was a hit and I also enjoyed watching the movie. Kantipur’s review mentioned that the movie was an average movie and with a very bad direction. That was in sharp contrast with the reviews published in the top Bollywood media writers like Taran Adarsh, Omar Qureshi of Zoom TV, and India Times, among others. The director Prakash Jha was hailed for portraying the reality of politics. The rating in the Indian media was at least 3.5, the movie has proved to be a blockbuster in the box office. The reality doesn’t justify the 2.5 rating and negative comments of the review writers at Kantipur.

Last Christmas, another Bollywood movie Tees Mar Khan received a not-so-good response and review from Bollywood media. This movie was suggested only for those looking for time-pass in the Christmas holiday. The movie was full of fun minus a sensible story, as told by the majority of the reviewers. Thanks to the festive season, the movie did an average business but that was less than the expectation. Last week, I found the review of the movie in Chalchitra Samikshya section in Nepali daily, Nagarik.

In the Nagarik review, everything was written well but, the writer was a bit rude in stating his/her views. The reviewer mentions that the movie is an example of a bad movie and if it became hit than this is a big shame of film industry. This movie doesn’t have any story and if it becomes a hit, it would be a shameful event for all the film makers. See the attached photo of the article (in Nepali) to get an idea on the tone of the article. 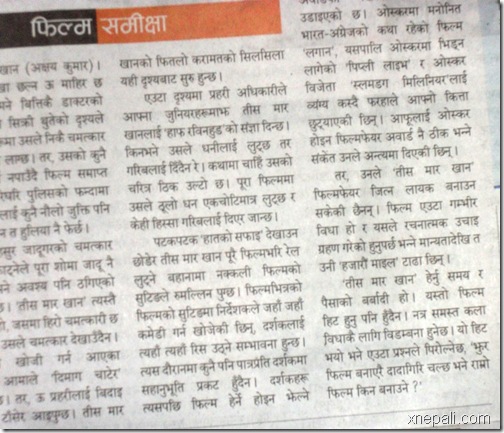 If it were a personal blog, it would have made sense. But, publishing such a personal thoughts in one of the most reputed and widely read daily in Nepal is something the editors should have thought twice. The writers should, at the least, maintain the dignity and reputation of the host publication. I think the movie was successful in achieving what it wanted – entertaining the viewers in holiday season. The movie was made for and released in Christmas – but there is nothing in the movie that makes its makers "shameful" as mentioned by the film reviewer.

After analyzing most of the movie reviews by Nepali writers, I have concluded that movie reporting skill lacks in Nepali reporters. The writers who write about Nepali film industry write for themselves rather than the readers. In fact, they don’t do much home works and research before writing anything about the movies. Review writers should focus the ‘facts’ not the ‘thoughts’. Thoughts are person-specific but facts are subject-specific and the reader is more interested in the movie than its reviewer. For example, if a reporter likes love story movies and the movie being reviewed is an action movie without any love sequences, the movie reviewer might not like it. That doesn’t make the movie worst and deserve a bad review in a publication/newspaper.