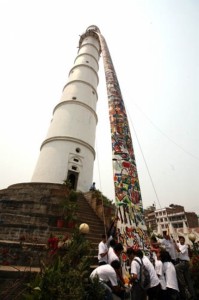 With an aim to set a new world record for the longest illustration, a noted Nepali artist has created a 130-metre-long acrylic painting, taking less than 13 hours for the job.

Kiran Manandhar, 51, created the painting titled `Abako Nepal` or the `Nepal of today` on April 25, 2008 at the 190-year-old structure `Dharahara`, known as the tallest monument of Nepal.

Hundreds of art lovers witnessed the event as the artist painted his creation on a 130-metre-long and 72-inch-wide canvas that hung from the 62-metre-high `Dharahara`, amid rendition of poetry and music by artists of a cultural centre.

Kiran, who has received his Master of Painting degree from Benaras Hindu University in India, claims to have broken the record set by a Filippino artist, who had completed a 100-metre-long painting in a day.

According to Jibesh Rayamajhi of Gurukul, Manandharâ€™s painting was done from a height of 203 feet and was initially expected to be 100 meters long, but on completion the artist had painted nearly 123.5 meters on a 125-meter canvas.

He had started the process of registering his works in the Guinness Book of World Records, he said.

The 130-metre art-work will be on display for the public at the Birendra International Convention Centre at Nayabaneshwor, on the day of the first meeting of the newly-elected Constituent Assembly of the country.