The 2012 movie ‘Jindagani Darpan Chhaya’ is produced by Shringar films Pvt. Ltd. Butwal and presented by Sarita Puri. The movie is claimed to be the first movie to be shot in Narayanhiti Palace (see the report attached below). The movie was released on June 15, 2012.

Enjoy music videos from the movie

Dance at Narayanhiti Palace for a movie

For the first time in the history of Nepal, a scene of a movie is filmed in the Narayanhiti Royal Palace. The palace used to be guarded and entry restricted to general public in the Royal regime.

Ex-king Gyanendra Shah vacated the palace after he was stripped off of his royal crown in 2008. The palace now serves as a museum. A song of a movie, Jindagani Darpan Chhaya, was shot at the palace on Tuesday, the day when the museum is closed. 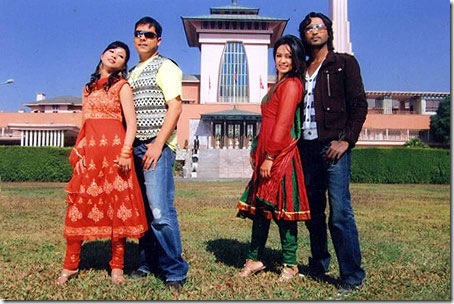 The movie song Samhala Timro Pacheuri is filmed on four actors Dilip Rayamajhi Nandita KC, Santosh Agrahari, and Rajani Pradhan. The movie will be marketed as the first movie to be filmed in the Royal Palace.