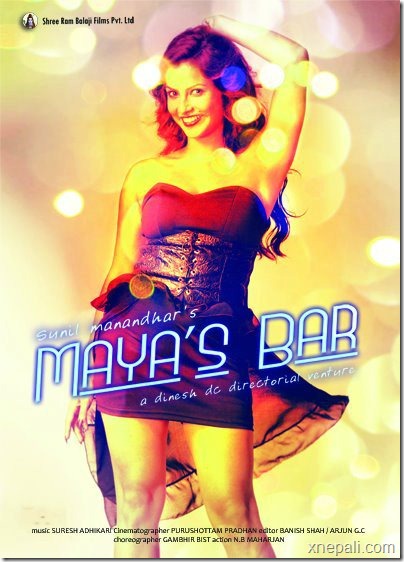 The movie features the cinematography of Purushottam Pradhan, fight direction of N.B. Maharjan, music direction of Suresh Adhikari, and editing of Banish Shah.

“Maya’s Bar” features Rajesh Hamal, Nisha Adhikari, Gajit Bista and Karishma Manandhar. In this movie, Rajesh Hamal can be seen in a negative character, a first such negative role in movie. His fans are excited to see him in new looks and the role. Nisha Adhikari is another popular actress in the movie. Nisha represents youths and audiences of city areas. Nisha’s role in her previous release ‘Apabad’ was good and expectations are high from ‘Maya’s Bar’ too. Nisha is in a role of a bar girl and so is Karishma Manandhar. This movie is very important for Karishma Manandhar because she is yet to give a hit movie after her comeback to Nepali films. This is the first time actor Gajit Bista will be seen in a lead role.

Famous media personality Dinesh DC is the director of the movie. Although a successful media personality, he has failed twice as a director. As a third directorial venture, this movie is very important for his direction career. “Maya’s Bar” is considered to ba an ambitious project of Dinesh DC.

“Maya’s Bar” is projected as a commercial movie targeted to both city and rural audiences. Although made with latest technology and hypes, it is still a formula movie. The budget of more than a crore is a huge amount and a huge risk in Nepali movie industry. Although the producer and director say that they are “fully confident” on its success, everybody say similar thing before the release of their movie. At the time when producers are compromising in budget to produce movies in a minimum budget, being uncompromising gained some more media attention.

The producer and the director have tried all they could to get media coverage and movie promotion and they have succeeded in their effort. A line “Sex always sells”, highlighted in one of the promotion, got some negative reaction. But, as the saying goes – ‘no publicity is negative publicity’ in Nepali movie industry.

In contrast to the current trend of the release of more than one Nepali movie in a week, “Maya’s Bar” is a solo release. A huge benefit for sure. We will talk about if it were a ‘benefit’ or not in the full review.