Nepali actress Mithila Sharma is one of the senior most artists in the Nepali film industry. She started her entertainment career in 2030 BS at the age of nine by dancing in a program. One of the audience of her first public show was the King Birendra. 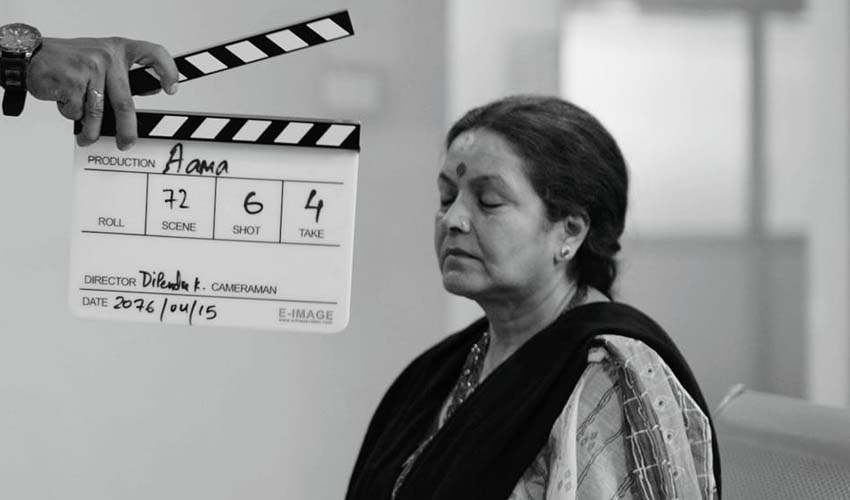 (Mithila Sharma during the shooting of her 2020 release movie, ‘Aama’)

In addition to acting and dancing she had also worked as a teacher in various schools and dance schools. She had taught a lot of actors and dancers in her career as a teacher. In addition to working in other institutions he has also established her own training institute – Mithila Kala Kendra.

She had worked as an actress in television serials, movies and music videos. Some of her noted movies include Aama, Maya, Aamako Kakh and so on.

Mithila remained unmarried till the age of 50 years. Unlike other actresses, she was one of the most uncontroversial actress. In 2014, she made news when she got married the former IGP Motilal Bohara.

A widower, Motilal Bohara had seen Mithila when she was just 10 years old. She had performed in a function held at the Police Acadamy at that time. Bohara remembered a sweet little girl all the time and he proposed Mithila to marry him in 2014. They got engaged in family gathering and got married in court. At that time Motilal was 74 years old and Mithila 50 years old.

Mithila has been awarded some of the prestigious awards in her life time. some of her noted awards include :

One thought on “Mithila Sharma Biography”