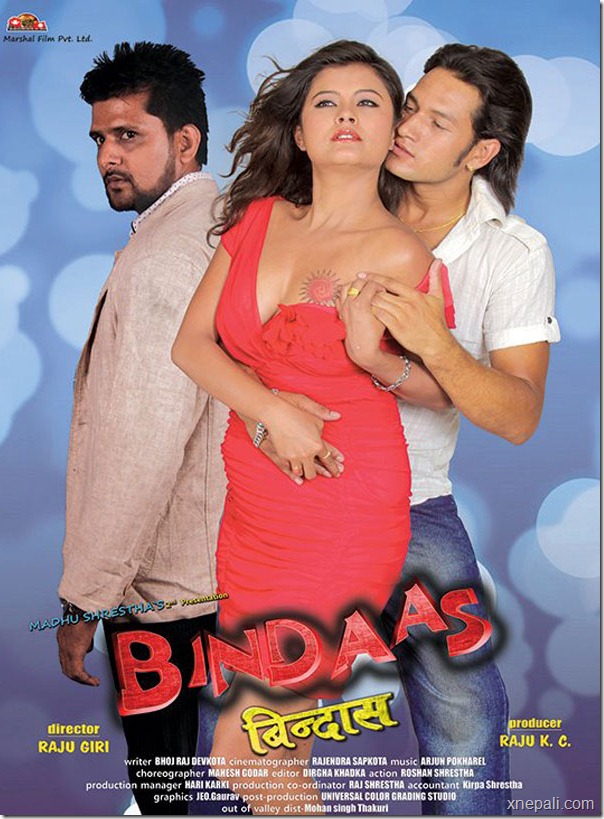 "Bindaas" is the story of Megha who had enough of her current boyfriend because he wasn’t as strong and romantic as she expected him to be. So she left him and gets attracted towards another guy, Rohan, whom she meet in an accident on her way to Kathmandu.

Rohan was more attracted towards Megha’s figure. As they get together, Rohan also found Megha’s best friend equally attractive. The movie is about the confusion of Rohan between Megha and her hot friend. I don’t want to ruin your movie viewing experiences by divulging what happens between them.

The movie’s only strength is its vulgarity. Sex and vulgarity was promoted from the start by creating buzz in media and social networking sites. Although the vulgar poster and rumors might attract some audiences to theatre but, I doubt it can keep the viewers seated in for the entire movie.

Well, the movie is full of weaknesses and here are a few to list:

The only previously known actress – Sushma Karki is the leading actor in the movie. As she didn’t have any good movies in her credit, this was supposed to be a turning point in her career. But because of the cheap role she did in ‘Bindaas’  the image and hype created by the ‘Udhreko Choli …’ item dance might even be degraded. Her performance in the movie can be called a very disappointing one.

The performance of other actors like Sushant Karki, Ashok Phuyal and Roshani Ghimire were also very poor.

The only selling point of ‘Bindaas’ are sex and vulgarity and they aren’t presented well. The movie is a big disappointment. Audience feel that the presentation is very cheap there is nothing to bind the audience in the seat. Some of the movie goers even told that the movie ‘Bindaas’ is, "one of the shameful movies in Nepali movie industry".