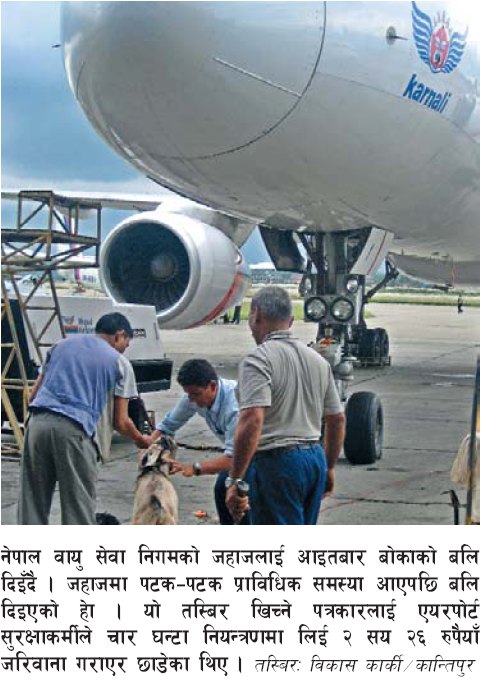 In might sound strange, but Nepalese people sacrifice goats to please gods. Well, I think it should have started as an excuse for killing animals for meat. In Nepal, a small country with a population of 24 million and 330 million Gods, even vegetarian people sacrifice vegetables like zucchini, cucumber etc. for the gods.

But you have to be alarmed when engineers that too in airlines business start to believe on such things.

Officials at Nepal’s state-run airline have sacrificed two goats to appease Akash Bhairab, the Hindu sky god, following technical problems with one of its Boeing 757 aircraft, the carrier said Tuesday. The goats were sacrificed in front of the troublesome aircraft Sunday at Nepal’s only international airport in Kathmandu in accordance with Hindu traditions, an official said. (Reuters)

The photo on the left is taken from Nepali National Daily Kantipur dated Sept. 4, 2007.

Translation of the Nepali text below the photo: An aircraft of Nepal Airlines Corporation being offered sacrifice of a goat. This aircraft has a history of recurrent technical problems. The journalist who took this photo was taken in captivity of the airport security personnel for four hours and he was charged Rs. 226 (about $3.50) as a fine on his release. Photo: Bikash Karki/Kantipur.