Houston Nature Centre has honored Raju Acharya with the World Owl Hall of Fame special award for his outstanding contribution in the research and conservation of owls.

The Special Achievement Award was awarded to Acharya on March 5, 2011 at the International Festival of Owls held in Minnesota, US. 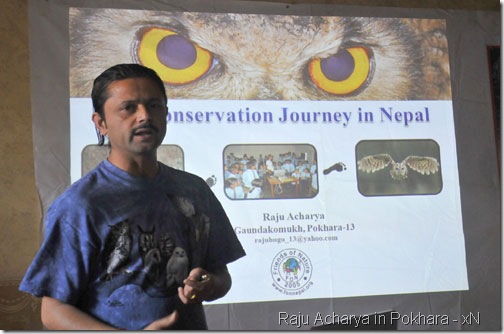 In the photo above, Raju is seen talking in a media event in Pokhara on March 21‚ 2011. (Photo credits – Krishnamani Baral)

A graduate in Environmental Management, Tropical Forestry and Agro-forestry, Raju Acharya is the director of Friends of Nature, a youth-led social and environmental organization and has been working in owl conservation for the last three years. Before that he had worked for Annapurna Conservation Area Project (ACAP) for ten years.

In an interview with Republica he told that he is interested in establishing an owl hospital in Nepal and develop it also as a conservation education center.