The director of hit movies ‘Maitighar’, ‘Kanchhi’ and ‘Mayapriti’ has died at 7:30 AM on August 9, 2016 in Mumbai. Thapa had been living at his residence in Mumbai for some time. The last rituals of the late director was performed in Mumbai. Born to mother Laxmi Thapa and father Narayan Singh Thapa, BS Thapa was 93 years old at the time of his death. 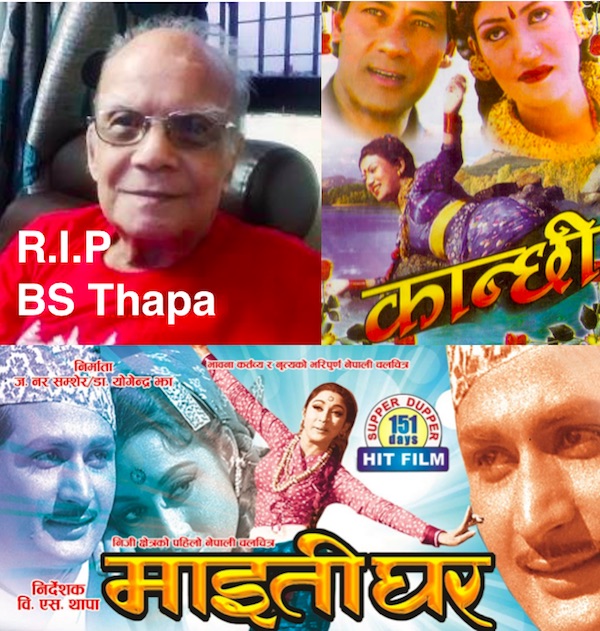 Popularly known as BS Thapa, his real name is Bhim Sen Thapa. After the completion of his intermediate studies in Nepal, he went to Lucknow for further studies. He got married to Saraswoti Thapa while he was studying. In a few years, his wife died after giving birth to three sons and a daughter. After the death of his first wife, Thapa had married a second wife.

In addition to directing Nepali movies, Thapa had also directed some Bollywood movies. Some of the movies include ‘Himalaya Se Uncha’, ‘Charandas’, ‘Laxmi’ and ‘Man Jite Jagajit’. BS Thapa’s father Narayan Singh Thapa was a Gurkha army in British India. After passing the voice test at the All India Radio, Lucknow Singh had started working in plays. He is credited to introduce the Bollywood duo Sunil Dutt and Nargish Dutt. Sunil Dutt is the father of the popular Bollywood actor Sanjay Dutt.

The movie ‘Maitighar’ directed by BS Thapa was the first Nepali movie to be produced by private sector. After the popularity of the movie, the production location of the movie is named after the movie, Maitighar in Kathmandu.

Writing about his death, actor Krishna Mall shared a photo of BS Thapa at his marriage. Krishna Malla met Sharmila Malla in the sets of ‘Kanchhi’ and they got married even before the release of the movie. Previously married three times, Krishna stopped marrying new girls after his fourth marriage with Sharmila Malla.

I wish the soul of BS Thapa rest in peace.