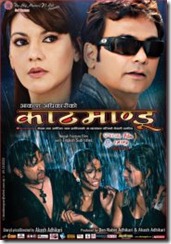 Thousands of people enter Kathmandu, the capital, from different parts of Nepal for the search of opportunities and fulfill their dreams. At the same time, many leave to tend their wounds when their dreams get shattered. Akash Adhikari’s movie, "Kathmandu", released today in Kathmandu, the city, is based on such types of different dreams, different problems, and varieties of people.

The movie, "Kathmandu", is made on the story a character, Aryan Rana (played by Akash Adhikari) who comes back to Nepal from USA after completing his study of film making. He competes in Nepal to get an opportunity to make movie and during his struggle, he faces different problems, typical of Kathmandu. Although he tries to fight with every problems, a problems in his family forced him to return back to the USA.  Apart from the family problem, "Kathmandu" tries to portrays problems in teens caused by the misunderstanding between their parents. Drugs abuse in teens and problems in them caused by the carelessness of their parents. The movie also deals with the problems of street children, problems of youth, unemployment, negligence of the government, the games played by politicians, and girls being exploited to make indecent movies.