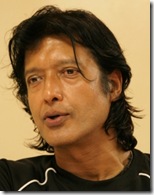 A film based on Tamang Community in Nepal, “Driver Chyangba” wwill start shooting ina couple of weeks. The movie will be directed by Sujan Lama, shot by Ratna Karki.

Nepali movie ‘Biratako Chino’ is going to be premiered on August 1, 2010 by Real and Real International in Sydney, Australia. The movie will be featured in other cities later.

Birtako Chino is based on fun loving youths who later turned out to be the the patriotic towards their county. The actress Richa and director Sankar  will attend the premier ceremony in Australia.