END_OF_DOCUMENT_TOKEN_TO_BE_REPLACED

After the premier show, the film makers of ‘Biteka Pal’ have collected the views and suggestions of the viewers to make it better. The movie is one of the four movies releasing on January 10, 2013. 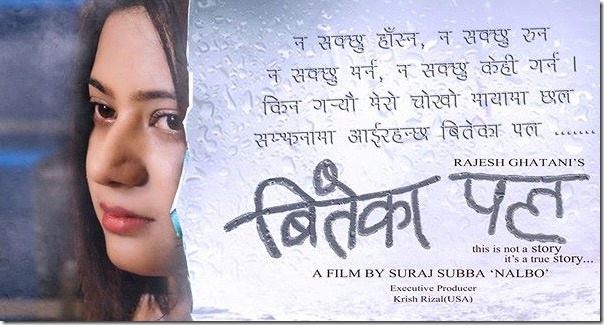 Although the director Suraj Subba ‘Nalbo’ was appreciated for making a good movie and the actress Keki Adhikari for her acting skills, some have complained that the movie has some unnecessary and confusing scenes. In a report, the producer Rajesh Ghatani has told that the length of the movie will be trimmed by 20 minutes to incorporate the suggestion of the expert viewers. In a Facebook message, Ghatani told that he has considered the suggestions of the viewers his New Year’s present.