On the first day of the new year 2074, three new movies are released in theatre. All three movies released on April 14, 2017 are the most awaited movies in the film idustry. Nikhil Upreti and Priyanka Karki starrer ‘Radhe’, Dayahang Rai and Keki Adhikari starrer ‘Ghampani’ and Swastima Khadka and Suraj Pandey film ‘Love Love Love’ are made by well known producers and directors. 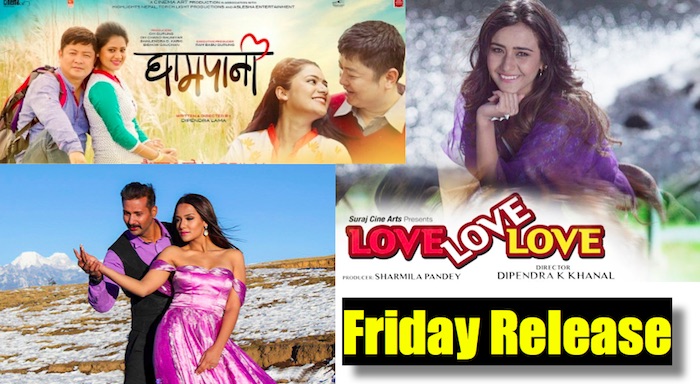 ‘Radhe’ is produced by Sushil Pokhrel and is directed by Jagadishwor Thapa.

The love story movie by well known director Dipendra K Khala, is produced by Sharmila Panedy. The movie features Swastima Khadka and Suraj Panedy in main role. The movie is told to be full of tears and laughter.

The debut movie of well known film critic, Dipendra Lama features Keki Adhikari and Dayahang Rai in leading role. The movie features an intercast marriage. Dayahang is featured as a Tamang guy and Keki is featured as a Bahun girl. The love story and the popularity of the songs is expected to be beneficial.