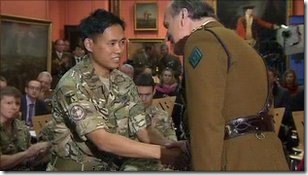 Gurkha soldiers are known for fighting single-handedly against a number of enemies. Last time, it was Indian Army Gurkha who fought more than 40 train robbers, in India to save a girl from being raped.

Now, a British Army Gurkha soldier was honored by Britain’s second highest medal for bravery for fighting off at least a dozen Taliban insurgents.

Acting Sergeant Dip Prasad Pun was stationed in a checkpoint near Babaji, in Afghanistan’s Helmand province. On September 17, 2010 militants opened fire from all direction.

Alone on the roof, Pun fought  rocket-propelled grenades and AK-47s. He fired a more than 400 rounds of bullets, detonated a mine, and launched 17 grenades in about fifteen minutes of intense fight. He even used the machine gun tripod to knock down an insurgent, trying to climb up to his position.

In a BBC news article, Pun says, "I think I am a very lucky guy, a survivor. Now I am getting this award, it is very great and I am very happy."

The Conspicuous Gallantry Cross medal is only one level below the Victoria Cross, the highest medal a British Army personnel can get. The 31 year old Acting Sergeant Dipprasad Pun’s father and grandfather both had been Gurkha in British Army. (Photo credits – BBC)