Nepali Language has evolved from Sanskrit. Initially, Nepali language was termed as “Gorkhali” or  “Khas” language but the king Prithivi Narayan Shah united the country, it got its name Nepali.

Other ancient books without their author’s name are ‘Swasthani Bharatkatha’ written sometime in 1658 BS and ‘Baj Parikxya‘ written sometime in 1700. The oldest known writer of Nepali books is Prem Nidhi Pant. Two of his books ‘Jwarup Pati Chikitsha‘ written in 1773 BS and ‘Prayashit Predi’ were both translation from Sanskrit books. 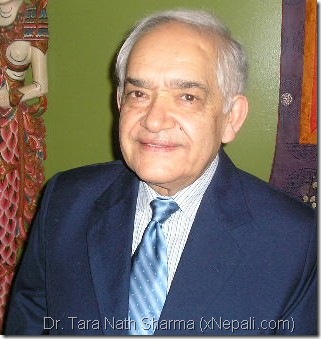 The first era of Nepali literature was generally written upon bravery. As in any languages, the early literature in Nepali language were also written mostly in the form of poetry. But, a poetry can only be written by the proper development of  prose. So, prose should also have dominated in the Pre-Bhanu Bhakta era. 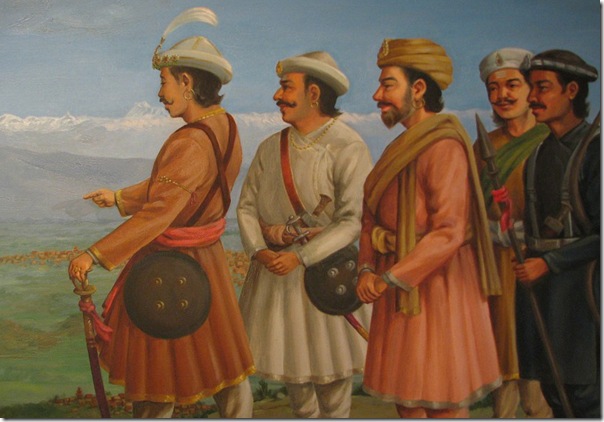 Important authors of the Pre-Bhanu Bhakta era were:

Shuwananda Das: Born in Lalitpur, Shuwananda Das was a poet of Newari lang
uage. Instead of routine Sanskrit verses, he used lyrical folksongs in his poem. Shuwananda’s works include poems about king Prithivi Narayan Shah’s bravery ,victories and journey to Kasi. He is believed to have written two of the three Shadhya ko kabita series – the series contain the presentation of a fight between bulls, an event considered to be an emblem of victories of Gorkhali army .  He also wrote many poetries  about king  Prithivi Narayan Shah’s bravery ,victories , journey to Kasi etc. 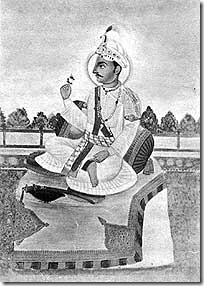 Prithivi Narayan Shah: The king who united the smaller kingdoms into a bigger Nepal and considered to be the founder of modern Nepal, hasn’t written any book himself. But, his advices and sayings were written into book as a guidelines called ‘Divya Upadesh‘. During the last days of his life his sayings were converted into written form by the writer in the palace. ‘Divya Upedesh‘ written in 1832 is considered to be the oldest original  prose written in Nepali. The book shows how the people live and the society worked in the ancient time. Based on his own experiences, Prithivi Narayan had given insights into ruling and governing a country.

Udaya Nanda Arjyal: The cousin of Shakti Ballav Arjyal was also a poet who had written a lot of poems to praise the king Prithivi Narayan Shah.

Sugauli Sandhi with the British rulers in India socked the nation and the literature in this era is much influenced by the incident. The writers in this era became fed up with politics and started writing on mythology. Although the kings and wars still 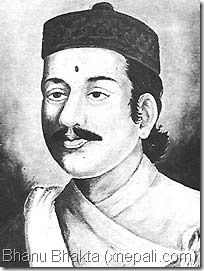 Bhanu Bhakta Aacharya (1871 BS -1925 BS), after whom the era is named is considered the all-time-legend of the Nepali literature. Born in Ramgha village of Tanahu district, Bhanu Bhakta’s grandfather Shri Krishna Acharya taught him to read and write. Later, he took him to Kasi for further st
udy. As his father, Dhananjaya Aacharya, was a government employee who worked for General Amar Singh Thapa, Governor of Palpa at that time. Bhanu Bhakta’s major contributions include – Ramayan, Badhu Shiksha, Bhakta Mala, Prasnotari, Ram Gita. This letters to Ram Nath, Tamasukas, and Applications are also published.

Yadu Nath Pokhrel: A resident of Shaptari, Yadu Nath was a patriotic writer. He had mostly written about the Nepal Army’s bravery, Bhim Sen Thapa’s tactful leadership. He had used a few English words in his works. He is most probably the first poet to use English words in Nepali literature. His works include Stutipadhya and Krishna Charitra.

The tradition of writing novel and gazals were introduced in this era . Various literary and news magazines, on Nepali , were started from outside and inside Nepal. The organization “Gorkha Bhasha Prakasani Samiti”, which was established by Ranas, was authorized to select which book can be published and which can not. Poet Motiram and his company did a fine job for promoting NL.

The important authors of this era and their major works

Rajiv Lochan Joshi (1905-1986):He was born and grown up in Kathmandu and was an active member of Motiram’s group . Moti Ram was so inspired by his poetries that he used to call  Rajiv as a “Kabi Sheromani”.
His works: Kabir Kalpa and many more.

Homnath Khatiwada(1911-1984):Born and grown in Nepal but due to political regions was obliged to move to foreign. Though he kept on serving Nepali
literature by writing and translating holy poetries.
His works: Rama Aaswamedh, Krishna Charitra, Nrisingha Charitra etc.

Chakrapani Chalise(1940-2015): Lyricist of national anthem, “Shreeman gambhira…”, was a fine poet of his time. He was honored with “Tribhuvan Prize” for his contributions.
His works: Chakrakabitatarangini, Nepali Samchhipta Ramayan, Nepali Samchhipta Mahabharat, Nepal Sichhya, Bagali Kosh, Paryayabachi Kosh and  many poems published in various magazines.

The important authors of this era and their major works

Lekh Nath Paudyal (1941-2022): Born in Pokhara and is honored by title of “Kabi Shiromani”. He is one of the best poets of Nepal. He got “Tribhuvan Prize”.
His works: Taruntapasi, Buddhibinod, Satyakali Sambad, Mero Ram, Ritubichar, Satyasmriti, Lalitya(2 volumes) etc.

Bal Krishna Sama (1959-238): Greatest play writer of Nepal. He changed the name of “Gorkha Bhasa Prakasani Samiti” to “Nepal Bhasa Prakasani Samiti” and worked as the president of it for long time. He was honored from “Tribhuvan Prize”, “Prithvi Pragya Prize”. He is also honored by the title “Natakkar”.
His
works: Aago Ra Pani, Chiso Chulho,

Gopal Prasad Rimal(1975-2030): He is very significant poet of NL. He arose his strong voice against the Ranas through his poems. He was honored
by “Madan Prize” and “Tribhuvan Prize”. He is also known as “Aadhunik Kabi”.
His works: Aamako Sapana.

Dharani Dhar Koirala (1949-2036): Born in Betali village of Ramechhap. He spent many years in Darjining as a teacher. He is a renown poet of Nepal and was honored by “Tribhuvab Prize”.
His works: Naibedya, Spandan.

The important authors of this era

0 thoughts on “History of Nepali Literature”