It is a very sad day for the Nepali film industry. A young and talented director has died of heart attack in her home on July 1, 2017. According to reports, Nilu complained about pain at around 2:00 AM. When she was rushed to the hospital at 8 AM in the morning she was already dead.
Video report about Nilu’s death:

Who was Nilu Doma Sherpa?

Born in 1985, Nilu Doma Sherpa, debuted as a film director in the 2015 release movie, ‘How Funny’. The movie produced by ex-Miss Nepal, Malvika Subba, featured well known actors like Dayahang Rai, Priyanka Karki, and Keki Adhikari. The movie also featured journalist Rishi Dhamala in a guest role. Although the movie was not successful commercially, one of the songs of the movie had been very popular.

Before her directorial debut, Nilu had also worked as an assistant director of the first Nepali movie about lesbian love, ‘Soongava’. She was also featured in a main role in ‘Punte Parade’.

A few hours before her death, Nilu was enjoying in the marriage ceremony of Nisha Adhikari. She had also shared photos of the marriage and she was also one of the close friends of Nisha who had participated in the Mehendi ceremony on Wednesday. She seem to be enjoying the parties.

Nilu wrote – “And yes that’s a High 5 between the Groom and The Bride… Looks like a match made in heaven. God Bless this new couple. Love and prayers always. #MattersOfTheHeart #LoveMovesUs #NishaWedsSharad #LoveIsInTheAir #BeautifulCouple” 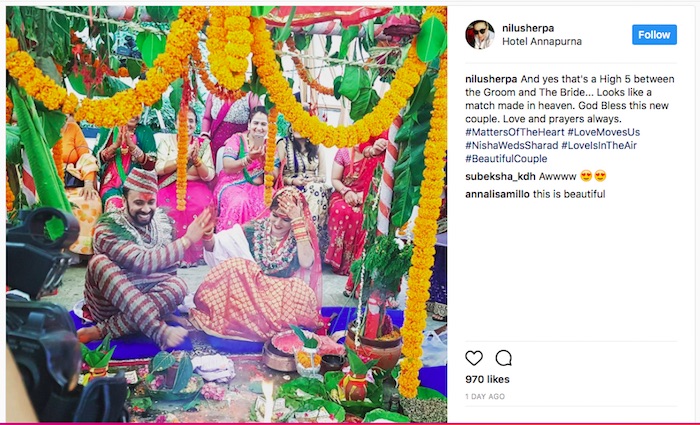 At the Mehandi ceremony:

It is a very sad day. Rest in peace Nilu Doma!