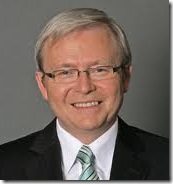 In a BBC report, Australia’s foreign minister, Kevin Rudd, has blamed the US in the release of thousands of diplomatic cables on Wikileaks. He told that its Australian founder, Julian Assange, has done nothing wrong.

The Australia’s foreign minister, in an interview with Reuters said, "Mr Assange is not himself responsible for the unauthorized release of 250,000 documents from the US diplomatic communications network. The Americans are responsible for that."

The Australian government is facing a growing complaints that it is not doing enough for Julian Assange as he is locked in an English jail awaiting extradition to Sweden.

In the UK, celebrities risked their reputation to raise £180,000 for Assange’s unsuccessful bailout.

Everybody knows it has nothing to do with the sex crime, he is charged with. Then why are the governments all over the world not feeling the "shame" on inappropriate sexual charges? Do they want to make it interesting by adding sex in already present secret, suspense, and thrilling cablegate release?