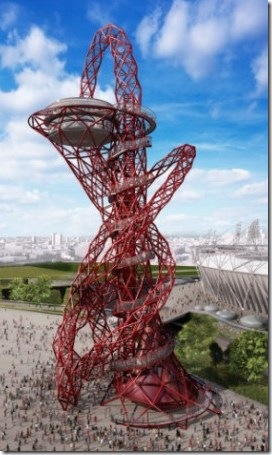 The India born, London based, Turner Prize-winning artist Anish Kapoor’s design ArcelorMittalOrbit is chosen by the authorities as a monument to mark the London Olympics in 2012. The tower, when built, will be the Britain’s biggest piece of public art.

It doesn’t look aesthetically pleasant, at least, not to my untrained eyes. But it sure is unique and one in the world.

The proposed tower is 375 feet high will be built as the monument to mark the London Olympics in 2012. The 1,400 ton steel structure designed by a India born is expected to cost around $30 million. It is expected that the steel will be supplied by another India born, London based businessman, Lakshmi Mittal.

About 700 visitors an hour will be able to visit the site next to the 193 feet high Olympic stadium. The tower will have a viewing platform and an outdoor walkway.

Kapoor describes the tower platform as : "an eccentric structure that looks as if it’s going to fall over." While comparing the tower with Eiffel Tower Kapoor told: "It would be terribly arrogant to compete with Eiffel who spent his entire life making that thing," Kapoor said. "What we’re trying to make is the best thing we can do."