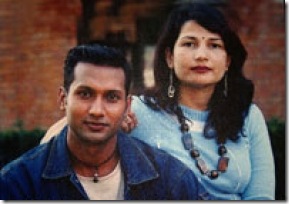 In the phone interview Kopila Upreti, official Mrs. Nikhil Upreti, repeated more than once that she has faith in Nikhil; indicating Kopila herself being unsure about the latest report on Nikhil and Sanchita’s marriage.

Kopila, in another TV appearance, a Sagarmatha TV program, reportedly told that, she can give life for Nikhil and can also take his life if he betrays her. Mother of Nikhil’s six month old child, Kopila, sound feeling betrayed by the actor, already.

Nikhil Upreti reportedly told that he has married Sanchita Luitel when he left for Mumbai a week back. His wife Kopila Upreti however told that he will conduct a press conference when he returns back on Sunday (March 28). Today is Tuesday and we haven’t heard from Nikhil yet.

All these events have led us to believe that Nikhil has in fact married Sanchita and has run away from Kathmandu to let the situation cool down by itself. It is told that Nikhil and Sanchita have rented an apartment in Mumbai and they will stay there for some time.

It is also rumored that Nikhil has also sold his vehicle and has finished all the movie projects in hand. He hasn’t signed any new movies.

Among all these rumors the only voice being heard is that of Kopila – she might be the only who is hurt most. Nobody from Sanchita Luitel’s family or Nikhil Upreti’s family has talked about it yet.

Sanchita Luitel had divorced with Aakash Shah, two years back. She had married Aakash after a lengthy love affair. When it was time to finish the relationship Sanchita went to court to ask for the divorce. Aakash Shah is a struggling actor in Mumbai. I hope Nikhil has made sure that the story won’t repeat with him in future.