The Nepali movie ‘Manjari’ makers have accused a journalist of blackmailing for advertisement. In a Facebook statement, the director of Tuka Entertainment, Ganesh Dev Pandey accused an online magazine FilmyZoom of asking for money. When the film makers refused to give the money, the journalist had threatened of starting negative publicity of the movie.

In an attempt to defame the movie, a review was published stating that the movie will flop. The prediction wasn’t based on any facts but because the movie named after a female name. At the time of this writing, the article is already removed, but there is a Facebook share, showing a portion of the article in the website’s Facebook page. 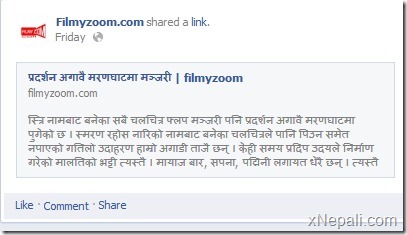 The article states that, "All the movie named after female characters fail to attract audience. So, ‘Manjari’ has flopped even before release." At the time of this writing, the post is already deleted. (the screenshot of the web history is given below)

I had asked the journalist who wrote the article, Swostika Chiluwal, to clarify the case. I will update the post after I get the reply. 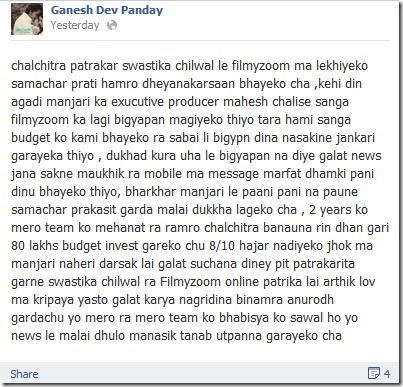 We will update on the case when we get more information from both the journalist and the film producer.

2 thoughts on “Manjari and blackmailing journalist”