The actress who had done all she could to get the FDB head post and the one who swiped the post from her were seen together in Shivaratri, sharing the same joint. Photos showing the Film Development Board head, Dharmendra Kumar Marbaita and actress Rekha Thapa wearing similar scarfs and having fun smoking marijuana filled cigarette was published in newspapers and online magazines. 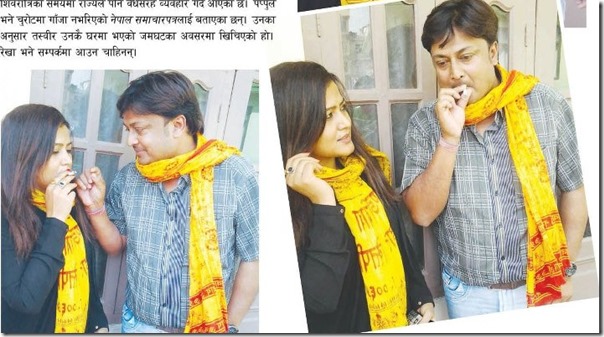 Photos of Rekha and Pappu, published in Nepal Samacharpatra

Although Rekha had made fun of the FDB head in the press meet in the USA, she had expressed her happiness on Pappu heading the government regulating body on her  arrival in Kathmandu.

Smoking marijuana is illegal in Nepal and, the photos of a government officer smoking the illegal substance demands for a deep scurrility. The appointment of Pappu in the post was protested by film artists in first. He had promised to do a lot but, hasn’t been able to show anything of importance to his credit yet.