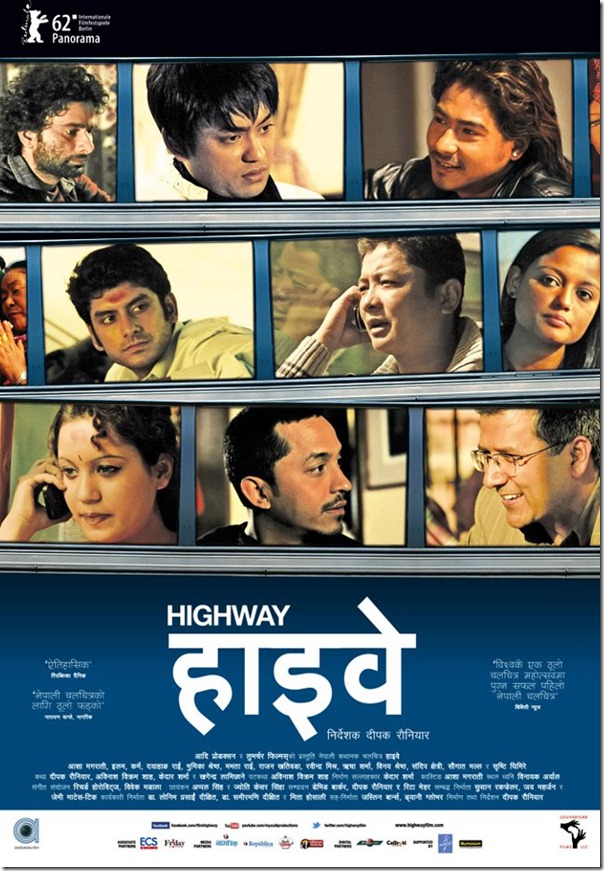 Highway features the story of five passengers travelling from Illam to Kathmandu in a bus. Their bus faces obstacles in the way because of a strike (Nepal bandha) thrice and the engine of bus also had a problems causing them to wait a night in a lonely place. Each of the five passengers have a story to tell and the delay on the road is causing them long-term problems in their lives. I wouldn’t like to ruin your movie viewing experiences by telling the stories of passengers and in what way they got affected by un-lawful strike.

Strength of the movie includes:

‘Highway’ features most of the preferred actors of the current time. Dayahang Rai had done a good job as a lahure returning Kathmandu to meet his wife. Asha Magarati, in the role of the lahure’s wife has also performed very well. Binay Shrestha’s role is short and sweet. The bar dancer, Reecha Sharma, has justified the role of a bar dancer and a loving sister. Saugat Malla’s role is short role and didn’t get an opportunity to show his performance. One would surely miss the Loot‘s Haku Kale’s performance.

Karma is in the role of a US returned guy, in a hurry to get married. Karma’s getup is new and cool but his performance is average. In his debut role in a movie, Rabindra Mishra, has performance well but, the character doesn’t have proper justification. ‘Highway’ minus Rabindra Mishra’s role would make no difference.

As a movie, ‘Highway’ is short in length and there are too many actors featured in the movie. So, many actors got a very short role – too short to show their excellent performance. In overall, the performance of the actors is good. Due to the problem in sound quality, even the best performed act became tasteless in some cases.

‘Highway’ is an art movie. The director has tried to show his artistic way of portraying many stories by connecting them with a common incident. In some cases, he has become successful and in many case he has failed. A couple of points to be noted:

One thing is sure ‘Highway’ will surely disappoint some audiences who go to theater with high expectations. If you have missed to watch short films of Deepak Rauniyar you should watch one. He is really good in making such short movies. In a long movie, he couldn’t keep the same charm for that long. The movie could have been made much better.