The movie titled Any Time Masti (ATM) had been one of the most controversial movies of all time. The vulgar dialogue and sex scenes had been highly criticized by everybody involved in the movie industry. The movie was banned by the government on the first day of release. Pre-release review of ‘ATM’ was posted previously. ‘ATM’ is the presentation of Dinesh Thapa under D Films banner.

Watch a short version of the movie:

Or watch the Hindi dubbed version of the movie:

Although all the artists in the movie are new actors, they got a huge amount of publicity because of the popularity of the trailer. Dinesh Thapa, the lead actor of the film is also the writer and one of the producers. Three actresses in in the film – Jiya KC, Sabina Karki and Sonia Sharma quickly raised to fame because of chhada dialogues they delivered in the trailer. The backlash on the trailer was so huge that the producer later claimed that the trailer wasn’t the authorized copy. The film makers had to face a lot of hurdles in terms of the censoring and answering the questions raised by journalists.

The director of the film Yadav Silwal has previously directed movies like ‘Manav’, ‘Timi Jaha Bhaya Pani’, ‘Shikari’. None of Silwal’s previous movies were successful. Despite of huge amount of publicity, ‘ATM’ also failed to be successful in box office. That was because, the censor board banned the film in it’s first show. When the film was re-released with modification, the initial charm had already faded out. The actresses also couldn’t get over the image created by the film. These days, none of the artists of the film are active in the film industry. 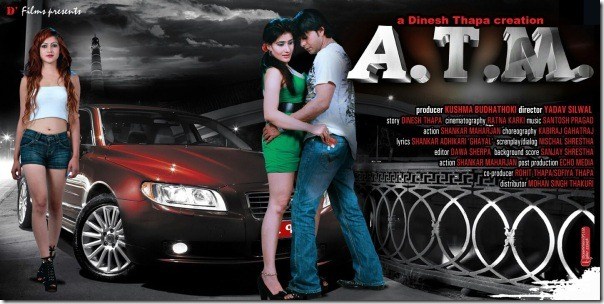 One thought on “Nepali Movie – ATM”