I am going to list all the videos that are trending this week. The video trending in the first place is – comedy serial ‘Meri Bassai’

The second place video is also a serial – SLC vs SEE, part 2 of serial ‘Aajkalko Love’:

The 3rd placed video in trending is the trailer of the upcoming movie ‘Nai Nabhannu La 5’. The movie is the fifth sequel of the series – a new record of most sequels in the Nepali film industry. The previous films are available to watch in xnepali.

I had also talked a about this movie and the artists in the movie in a previous post. (Read a post about ‘Nai Nabhannu La 5’)

Enjoy the trailer of the film:

4th place video is a shooting report of upcoming sequel film ‘Chhakka Panja 3’. The third sequel of two previous sequel film is also being made by the producer of ‘Nai Nabhannu La’ series producer Bikash Acharya in association with Deepak Raj Giri and Deepa Shree Niraula. The previous sequels were made by Deepak and Deepa and Bikash has joined as one of the producers in the third sequel.

Watch the previous sequels of the film:

The second sequel is not released online yet.

Like previous series, Deepak has written the script and Deepa Shree Niraula is directing the film:

The fifth video in the trend list is that of Nischal Basnet by The storyteller channel. The director Nischal Basnet is known as one of the best directors in the Nepali film industry. Apart from being a good director, he is also a good actor and a good playback singer. He has given voice to more than a couple of songs in films.

6th video in the list is a folk song – A dohori song by Krishna Kandel and Jeri. Credit to Indreni channel.

A teej song made to the 10th Nepali video in the list:

Note: The ranking of the video is not same as the ranking by YouTube. That is because, I have removed Non-Nepali videos from the list. So, videos that is not in the top 10 list trending in Nepal have made it into the Top 10 list. 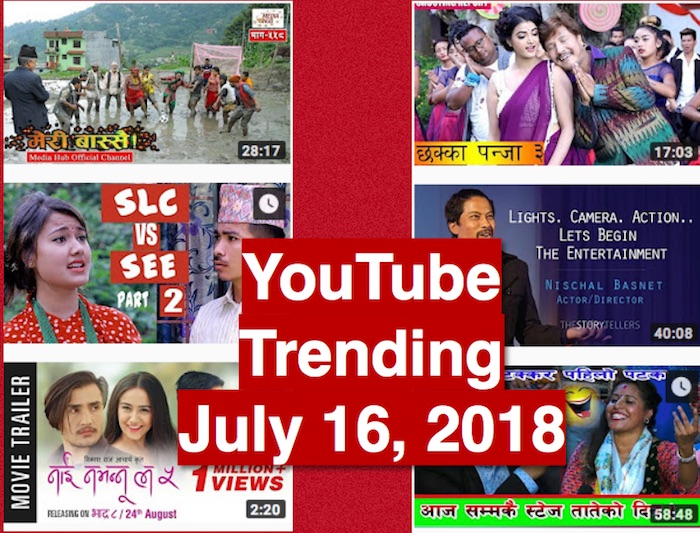