The movie was made for Om Trinetra production by Bishnu Gopal Shrestha. The super hit movie of its time, ‘Chino’ was one of the best movies of Shiva Shrestha and Bhuwan KC. The songs featuring the voice of Narayan Gopal were also the major attraction of the movie. ‘Mohani Lagla Hai … ‘ is the all-time favourite song of Narayan Gopal. The director Tulsi Ghimire has written and edited the movie. The leading actresses in the movie, Kristi Mainali and Sharmila Malla have also done a great job. The movie is written by the director Tulsi Ghimire. Ghimire was also the editor and one of the actors in teh movie.

This is the old Nepali movie ‘Chino’. The new version of ‘Chino’ can be watched here.

One of the superstar of Nepali film industry, Shiva Shrestha is the lead actor of the movie. Another superstar, Bhuwan KC is also in the leading role in the movie. The actresses in the movie are Kristi Mainali and Sharmila Malla. Kristi is known for her acting skill and her beauty. These days, Kristi is living in the USA. Sharmila Malla is known for her beauty. The wife of actor Krishna Malla, Sharmila is living with her husband and grown up son. She is not seen in movies these days.

Shiva Shrestha is seen in movies occasionally. He is living with his second wife and a son. From his previous wife Shiva has four daughters and a son.

Bhuwan KC has been successful film producer and a successful director after directing his debut movie ‘Dreams’. 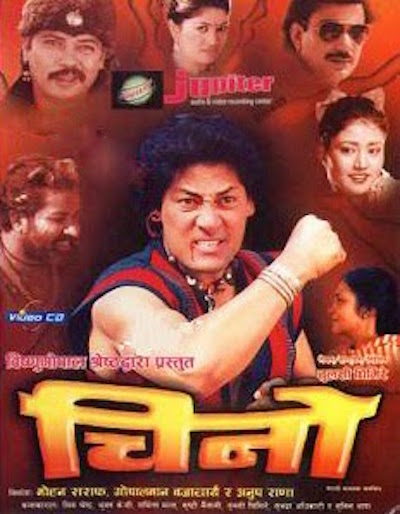