A movie featuring a teenage love story, ‘Kina Garey Maya’ made under Abhi Films Production features mostly new actors. Well known actors like Rashmi Bhatta and Sushma Karki are also featured in the movie. The movie is about the patch-up between the teenage lovers and their relationship with the parents and the society.

The movie is the directorial debut of Ramesh Bogati and is produced by Hiralal Ghalan. The movie features the cinematography of Divya Subedi and Niraj Kandel. The music directors of the movie are Mahesh Khadka and Basanta Sapkota. The movie was released on May 30, 2016. The movie wasn’t much successful among the viewers at the time of its release. The playback singer in the movie are Rajesh Pyal Rai, Deepak Limbu,Raj Timalsena,Manish Pokharel,Banika Pradhan, choreographers are Manoj Hamal and Suresh Pande, action by Shankar Mahaerjan editing by Mitra Gurung and the background score by Amit Shrestha.

The release news of ‘Kina Garey Maya’. Apart from the hot actress, Sushma Karki, no other actors in the movie have been featured in many Nepali movies. 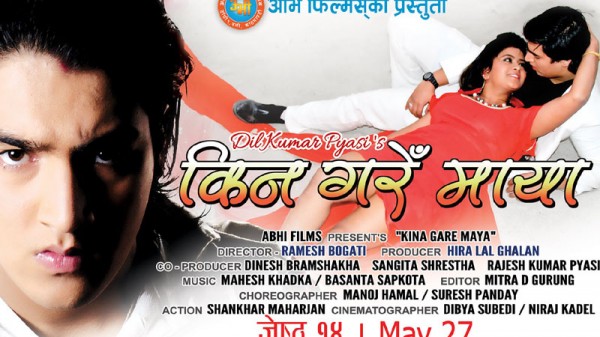