The movie to release this Friday, November 25, ‘Purano Dhunga’ movie was premiered on Thursday among film industry personnels and media pearsonalities. The premier show was held at Jaya Naepal theater in Kathmandu. The lead actors of the movie Dayahang Rai, Mao Tse Gurung, Menuka Pradan were present at the show.

Actress Priyanka Karki however wasn’t present in the show as she is currently in the UK for the shooting of her upcoming movie ‘Happy Days’. Dayahang Rai had finished his part of the shooting and had returned from the UK recently.

Other film artists in the premier show were Aryan Sigdel, Sanjog Koirala, Barsha Raut, Keki Adhikari, Benisha Hamal and others.

The movie ‘Purano Dhunga’ had gained a lot of traction because of the success of the song ‘Nira ..’ because of its cachey tune. The movie produced jointly by Cine Arts and Maotse Gurung Films is directed by the director of ‘Kabaddi’ sequels, Ram Babu Gurung. The movie is made on the story of two brothers who clash on who owns a boat. The script of the movie is written jointly by the director Gurung and Uprendra Subba. The script writer duo had also written the script of ‘Kabaddi’ and its sequel ‘Kabaddi Kabaddi’

After the premier show, the movie got positive feedback from the viewers. The acting and the role of Maotse Gurung was appreciated by most of the viewers.

Links to watch the hit movies of Ram Babu Gurung and related tags: 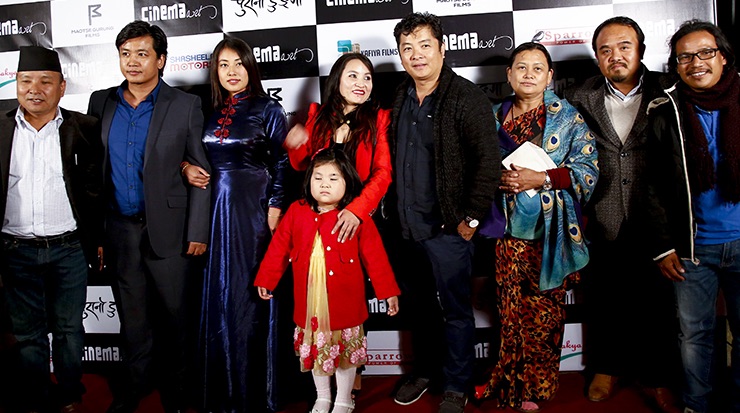