Priyanka Karki has found a boyfriend, 5 years younger than herself (yes yes, the age doesn’t matter). Before, Priyanka Karki, Ayushman and Paramita RL Rana were almost married (yes, it is their personal life). The boyfriend Ayushman Desraj Joshi Shrestha is a celebrity son – son of a stunning banker, Raveena Desraj Shrestha.

Celebrity gossips are juicy and fun, readers love them. They also care about their favourite celebrities and always wish them the best. We often forget that, celebrities are also human and that they are also entitled to have a private life.

Every private moments of Priyanka and Ayushman have been public affair for a while. I had also shared some paparazzi style photos of the couple in Pokhara. I have a couple of more exclusive photos to share in this post (Hint – they are at the end :). But, there is nothing wrong with the photos, as they are just going around in public places. Most of the people who saw them would say “Hey, isn’t that Priyanka and Ayushman?” and go on doing what they were doing. One of my friends went a step further and took these photos.

It seems, Priyanka and Ayushman have taken the negative comments elegantly – but, the mother, Raveena, seems to be a bit more concerned of her son and his affairs. The mom, Raveena Desraj seems to be handling the case in a typical technical/managerial way. After all, she is a banker! I hope, she understands hearts as well as money!

First, Raveena invited Ayushman’s ex-girlfriend, Paramita RL Shah (my assumption, based on the photo she shared). Both Raveena and Paramita shared a photo of the three – Pramita, Raveena and her younger son and Ayushman’s borther – Ashirman Desraj Joshi Shrestha. 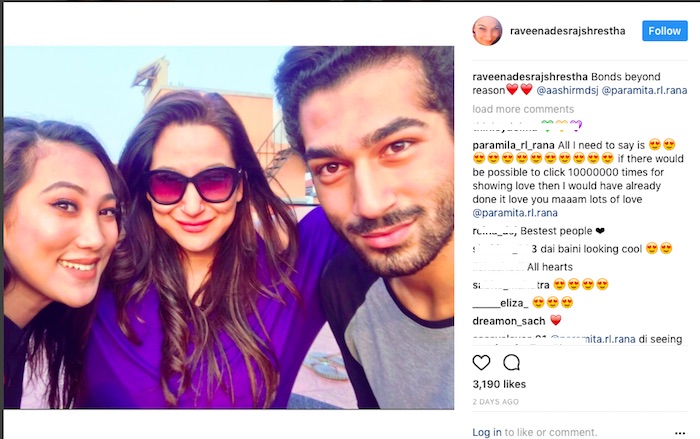 As if that was not enough, Raveena wrote a long post in Instagram, sharing a childhood photo of her son on the next day.

Yes, it was a well thought plan, strategically coordinated and executed by a professional strategist! Here is the full text copied from Instagram (As it is a long text, I have inserted paragraphs for easy read):

My baby @yatzeee (Ayushman Desraj) You are grown today and years have passed. You’ve grown to make a name for yourself and are a public person. Therefore, Your life and your life choices are open to public scrutiny.

There’ve been countless moments the love showered on You has made my heart swell with pride and there have been times I have, like presently, witnessed your Life being sliced, analyzed and judged and mis-judged. As parents, we cannot shield our children who are in the public eyes but, I KNOW who You are and the essence of You.

I have come to know beautiful Souls thru You from the friendships You made and they too are public figures. Strong bonds have been created with the meeting of beautiful Souls thru You like with @paramita.rl.rana for which I Thank You for bringing them into my Life experience. Whilst Pam and I sat together yesterday and made that post about the current status of the relationship between You both as You also know, I see today the backlash on You and it breaks my Heart.

I Respect the resolve and Respect with which You have handled this point in your Life and while both You and Pam make your own Love choices today..I make this public post to all the beautiful, dignified fellow humans to quit analysing this any further. Both Ayush and Pam are perfectly fine at their own ends with both having found newer friends who fill their hearts today with hope and Love for a better tomorrow.

I cannot stop You I know but having raised children who are taught to refrain from lashing out and disrespecting those that misjudge them I know that there will be no ‘clarification’ that will come from Ayush’s end and he will remain silent because of his nature and choose to silently suffer.

I intervene at this juncture so that people who have dedicated to entertain, contribute and serve us thru the path of media/films be given some down time now so that they can continue to focus on their work. I post this without Ayush’s knowing and this is not an attempt to clarify or change opinions but just to let a fellow human live in the Peace that each of us seek and deserve. Thank You. 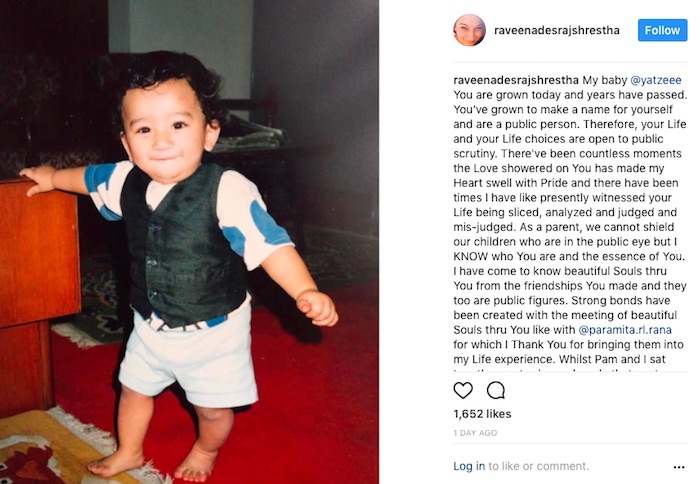 In response to one of the comments in the same post Raveena writes: “Thanks for voicing your opinion. As far as I know within the family the ‘dust’ had already settled but the world does have their right to opine which I chose not to comment on except that it is digestable for me as the guardian. However, guess once anyone decides to enter the ‘public’ space, the only thing I can say is that one signs up for public opinions as well. So long as it is not damagingly misunderstood and leading up to a character assasination due to the lack of clarity which is when the guardian decides to intervene although I let my sons fight their own battles. Honoring your comment hence my response. Blessings to You and all.”

Now, the photos from Pokhara: 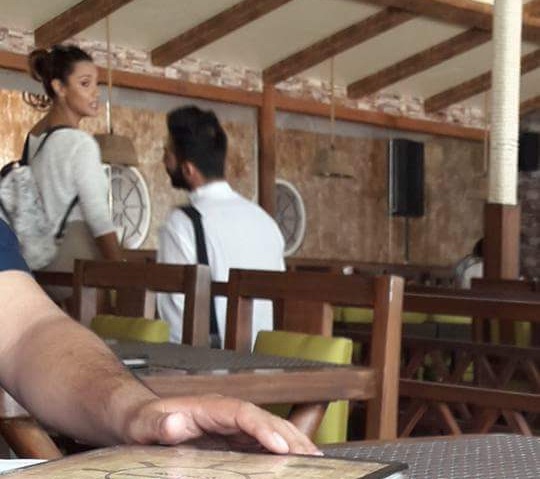 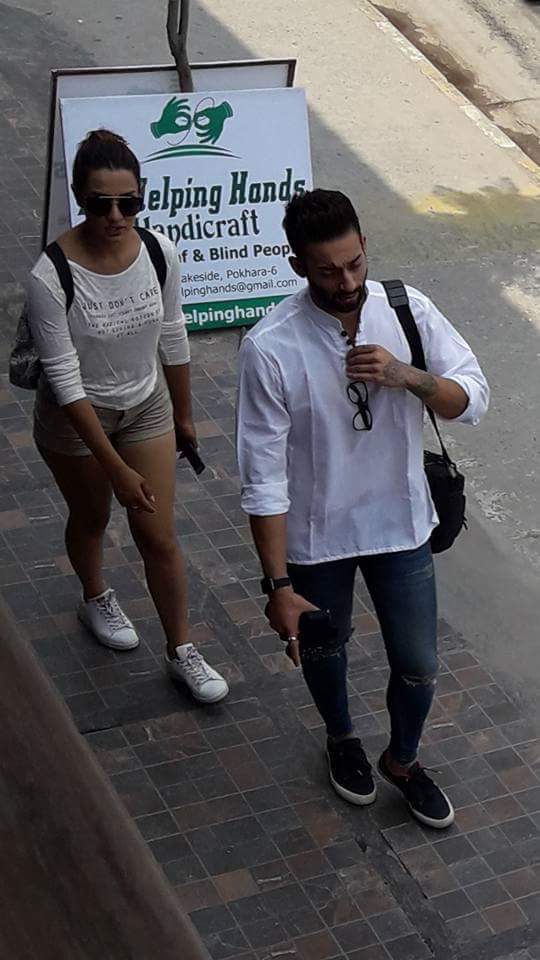 A video report about the affair: