END_OF_DOCUMENT_TOKEN_TO_BE_REPLACED

‘Fateko Jutta’ is a presentation of Arjun Kumar Films Productions in association with Highlights Nepal. The movie was liked by viewers and it was successful in attracting viewers to the theatre.

Watch the full movie in a single part:
END_OF_DOCUMENT_TOKEN_TO_BE_REPLACED

Last time it was Christianity. She distributed Santa Clause things during Christmas to poor kids and was accused of promoting Christianity to poor unsuspecting kids. She did that for the kid’s fun and entertainment.

Now, she is being the target of Muslim people in Nepal. There was a fashion show featuring hijab and Shrinkhala along with actress Priyanka Karki and banker Raveena Desraj participated in the fashion show. But, their participation was controversial.

This is what people think – “Now Promoting hijab. Next promote burqa. Next promote sharia law in Nepal. And next stone a woman to death in Tudikhel for marrying someone she chooses.”

One commenter says: “I am extremly disappionted @shrinkhala_ ..Hijab is a symbol of women oppression ..I am not against the people who wears it because its their choice but please do not encourage it ..it should not be something you celebrate.”
END_OF_DOCUMENT_TOKEN_TO_BE_REPLACED

A Presentation of One Time Cinema, the fifth sequel of the ‘Nai Nabhannu La’ series features Niruta Singh and Dilip Rayamajhi. New actress Sedrina Sharma was liked by viewers.

Two actresses have totally different approach on the troll that has been going on in the internet.

A usually sober actress, Barsha Raut, appeared in a revealing cloth in the premier of her film ‘Jatrai Jatra’ in Sydney, Australia. That is in contrast of the perception that Barsha doesn’t prefer showing off her body. When the trolls start to surface, Barsha’s husband responded by telling that he was supportive of Barsha (video temporarily removed).

Then came Priyanka Karki. The actress often being trolled herself also supported Barsha and wasn’t happy for those taking the issue negatively. Priyanka Karki in her Instagram post wrote: For all the peopel sying the dress is too ‘low cut’ she should have worn something sober … the dress is too ‘revealing’, you shouldn’t have done that for publicity …
NO! You (the ones saying the most demeaning and disrespectful stufd about a woman. YES YOU!) Actually you’re too ‘judgmental’ and you need to STOP THAT SHIT! NOW!”
END_OF_DOCUMENT_TOKEN_TO_BE_REPLACED

After, Priyanka was questioned on her Cannes 2019 performance, she has kept herself silent for a while. Keeping silent is not something Priyanka does often. After days of silence, Priyanka shared an interview video without any details on who the interviewer is and for what TV or online the interview as taken. The setting looks like a lobby with a couple in people in the background.

END_OF_DOCUMENT_TOKEN_TO_BE_REPLACED

In the beginning Priyanka told:

Like some normal people, we believed her and were very happy on her representation of our country. Then things started to go out of sync. Priyanka started copying Bollywood celebrities style.

I thought, that was her love to Priyanka Chopra and being her die-hard fan, Karki was trying to be Chopra at the festival (now, I am not sure if that was a sign of inferiority complex.)
END_OF_DOCUMENT_TOKEN_TO_BE_REPLACED

The title is borrowed from a song: The singer complains his better half’s nagging about love as he is more worried about the country.

Actress Priyanka Karki is in Cannes to participate in the Red Carpet shows of some of the films. Her to-be-husband, Ayushman Desraj Joshi is in Thailand. Ayushman has expressed his love for the country in trio-posts in his Instagram. I found them interesting and am sharing them here.

It’s natural to be frustrated with the on goings of the World, the country to be more precise and staying quiet about it isn’t going to solve the problem either but I urge and now plead to you all to actually use that energy that you so freely exert into hate, into something more productive. I have, I do and I always will be loyal to my Nation, my Nepal but let it not reach a point where we are pushed into leaving. Because as I have said, we are very close to losing it. Thank you! Jay Nepal!

END_OF_DOCUMENT_TOKEN_TO_BE_REPLACED

Today is the big day for the Nepali film and entertainment industry. For the first time, Nepali actress, Priyanka Karki is making the Red Carpet debut at the Cannes Film Festival, France.

On May 21, 2019 Priyanka wrote, “Making my first red carpet appearance tonight and lord knows how excited I am. This is huge for all of us and I promise to make you guys proud!” She also shared a pass showing “Gisaengghung de Bong Joon-ho”. 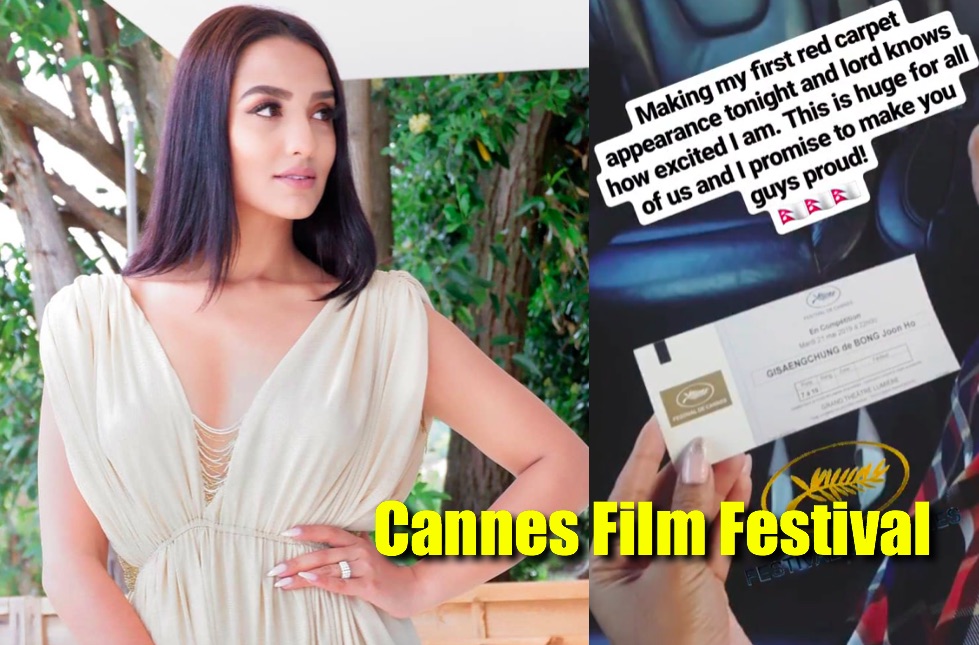 END_OF_DOCUMENT_TOKEN_TO_BE_REPLACED

For the first time in the history of Nepali film industry, actress Priyanka Karki has become the first representative to go to the festival.

The Cannes Festival was called the International Film Festival (Festival international du film) until 2002. Now, Cannes Film Festival, is an annual film festival held in Cannes, France, which previews new films of all genres, including documentaries from all around the world.

The festival was founded in 1946, the invitation-only festival is held annually (usually in May) at the Palais des Festivals et des Congrès. It is one of the “Big Three” alongside the Venice Film Festival and Berlin International Film Festival.

The 2019 Cannes Film Festival is taking place between 14 and 25 May 2019. Mexican filmmaker Alejandro González Iñárritu has been named the jury president of this year’s festival.

To announce her travel to France, Priyanka wrote:
END_OF_DOCUMENT_TOKEN_TO_BE_REPLACED

Actress Priyanka Karki and Ayushman Desraj Joshi got engaged last year. There were two separate ceremonies to celebrate their engagement. At that time, Priyanka had told that they were going to get married “next year”. Now, it is the “next year.”

When journalists asked Priyanka Karki about her marriage, she told, “Now wedding is not certain.”

Watch the following video to watch what she told:

Yes, she has clearly told that the wedding plan is not going on as they had planned before. After I saw the interview, I did a little bit of searching in their profiles. My calculated assumption is:

It is Priyanka who is not happy. She has topped sharing photos of Ayushman in her Instagram profile for more than a month. The last photo of Priyanka with Ayushman was posted on March 4. In the meantime, Priyanka had wished Ayushman’s mother Raveena Desraj on her birthday. She has shared photo of Raveena with Priyanka. Ayushman is not with them in the photo:
END_OF_DOCUMENT_TOKEN_TO_BE_REPLACED

Actress Priyanka Karki and her boyfriend (to-be husband) Aysuhman Desraj Joshi are having a great time in Bali, a touristic destination of Indonesia.

Priyanka told the reason they went to the island :

And we're off❤🌟✈🌊 Thank you for this much needed break baby. I'd absolutely love more surprises like these! ANYDAY😜 I love you❤ #bali2019 #singapore2019 #ayanka #vacaymodeon #ayankation 😉😎

The actor couple – Priyanka Karki and Ayushman Desraj Joshi have decided to start a foundation under Ayanaka name. They are working actively in developing and working to help in the welfare of children, health and cleanliness.