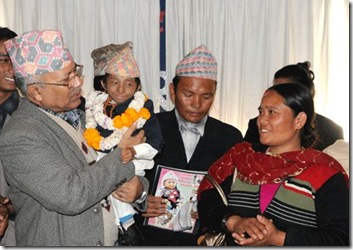 The kid Prime Minister, Madhav Kumar Nepal, is carrying is not a kid at all.

The little man, Khagendra Thapa Magar, has just turned 18 and is going to London to register himself as the shortest person in the World. He is collecting funds for the travel cost.

It is good thing that Khagendra is going to be the record holder. But, I didnâ€™t know that you have to go to London to register yourself in the Guinness World Records.

â€¦Once you have received the guidelines you can attempt the record and collect all the evidence as indicated in the guidelines and in the Records Breakers Pack. You can send the evidence to our office in London, where we will be able to verify it within 6 weeks and send you a certificate to commemorate the achievement, if the verification is satisfactory.

While going through the FAQ it also says that they donâ€™t pay anything to the record breakers.

Flying to London might simplify the process and he could be able to see the London city. It sure is a nice opportunity to travel. All the best with his travel plans and his quest to get registered in the World Records!

There are some more photos of the little guy in my previous post. An American magazine, National Enquirer, compared Khagendra with a 1.5 liter coca-cola bottle in an article titled â€œTiny Teen to be Named Worldâ€™s Smallest Manâ€. (Photo credits â€“ Nagarinews)