Like every other fields, film writing in Nepali film industry is also dominated by males. Only a few writers are female. When the script writing is done by the wife of the director or the producer of the movie, question arises how genuine the writer is. For example, wife of noted director Sambhu Pradhan’s wife Nutan Pradhan and actor and producer Bhuwan KC‘s ex-wife Sushmita KC have also written scripts.

Actress Arunima Lamsal wrote the script of ‘Deepsikha‘. When the movie failed to impress audience, Arunima’s career as a writer is considered to have ended. Another writer, Kusum Anshal is also known to write the script of a movie made jointly by Nepal and India – ‘Panchawati’. Last year, actress Benisha Hamal had told about writing the script of a movie but, nothing is heard about that again.

END_OF_DOCUMENT_TOKEN_TO_BE_REPLACED

* This feature article is a part of women in Nepali film industry series. Another article in this series is female writers in Nepali film industry. UPDATE on April 22, 2015: Dipa Basnet has directed another movie titled ‘Shree 5 Ambare’ and Samjhana Upreti has also directed her second movie ‘Falgu’. UPDATE on July 11, 2015: A new female director, Deepa Shree Niraula has announced a new movie titled ‘Chha Bhane Maya Chhapakai Laideu’ (an audio report attached at the end of this post).

Watch a short video on the Female directors of the film industry: 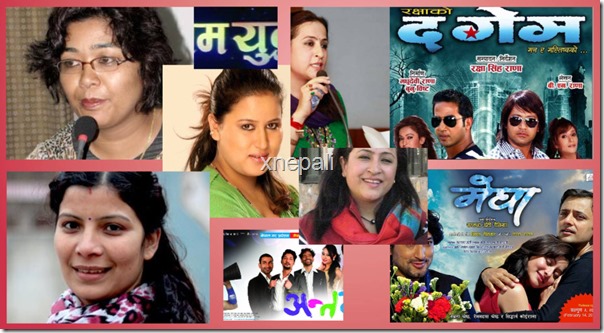 The first female director in Nepali film industry is Suchitra Shrestha. She started as a film journalist and eventually became the director of ‘Prem Yuddha’.