Former General Administration Minister, Rabindra Shrestha, has eloped with a college girl before the new cabinet was formed. Shrestha was missing since Sunday after new prime minister took oath of office and secrecy. 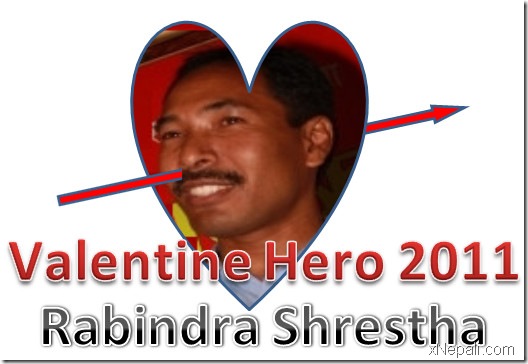 A 50 year old, former Valley in-charge of CPN-Maoist, was suspended from the party for extra-marital affairs. Shrestha joined UML in 2008 and eventually became the minister.

Rabindra’s 22-year-old sweetheart, Suvechha Silwal of Dhading, is a student at Kathmandu Model College in the Capital. The Master’s level student, is also a member of the UML-affiliated All Nepal National Free Students’ Union through which they met.

The love affair at the time of Valentine Day has gained a lot of popularity and, our friend Dipak Bhattarai has even proposed Rabindra to be named "Valentine Hero 2011". I like the joke and would propose everybody to vote for the odd Valentine Hero. I won’t be surprised if he gets the Female Ministry, in the newly formed cabinet (it is still UML in the government and he still has a chance.)

One thought on “The Valentine Hero, Ex-minister Rabindra Shrestha”