It is suspected that Prachanda has decided to leave the country after he was warned about the possible threat from his own friend of past – Biplav. Prachanda told about the threat in a public event and told that that was not going to help his friend who had worked as his secretary during the people’s war.

When CPN Maoist decided to go to election and form government, a faction of the party had separated itself from the party and formed another party under the leadership of Biplav. The party is now trying to re-do what Prachanda did decades ago. They are trying to create problem to the government and re-orginize the party.

Talking in an event, Prachanda warned Biplav not to try being Prachanda. He suggested them to do something different to fulfil their demands.

Can Biplav be the next Prachanda?

Like Prachanda said, the socio-economic status of the people in Nepal has changed drastically since the end of People’s war. There were a lot of unemployed youths and disadvantaged people at that time. Those people were easily motivated to fight against the government. But, that was abruptly changing while the war was going on – many youths were leaving country. That caused in the reduction in the fighters of the party. That was the reason Prachanda was forced to make and agreement with the government and end the conflict.

Now, people are a lot more aware and smart. Formation the army like that of Maoist of the past is not going to be that easy. Although things are not going on as expected, there is a lot more economic activities, there are a lot of employment and many of the youth in the villages have gone to the foreign countries. The popularity of mobile phone, internet and social network has made people more aware of the world.

Is Prachanda afraid of Biplav?

Prachanda had carried a price on his head by then government. He is a brave man and he wouldn’t be afraid of life. But, this time, the situation is different. He has lost two of his children in the last few years. The death of his only son Prakash Dahal, has caused a lot of distress to his wife.

In the mean time, Prachanda’s party CPN Maoist has been dissolved in CPN UML and is named CPN. Now, he is not the sole leader of the party, prime minister KP Oli is also the leader with the similar power as that of Prachanda. Oli seems to be more powerful at time as he is the prime minister. People think he is not at pre-Prakash-death level.

The current threat has come from within Prachanda’s own closest member of the past. Biplav and his team knows everything about Prachanda. They know all his weaknesses. It is much more dangerous to deal with a ex-friend than an enemy. This fact might have scared Prachanda to leave the country and return back when things start to become normal.

The prime minister, KP Oli, would also love if Prachanda stays in the USA for a long time. That would mean, he would be in control of the party and will be able to fill the vacuum left by Prachanda in the party. 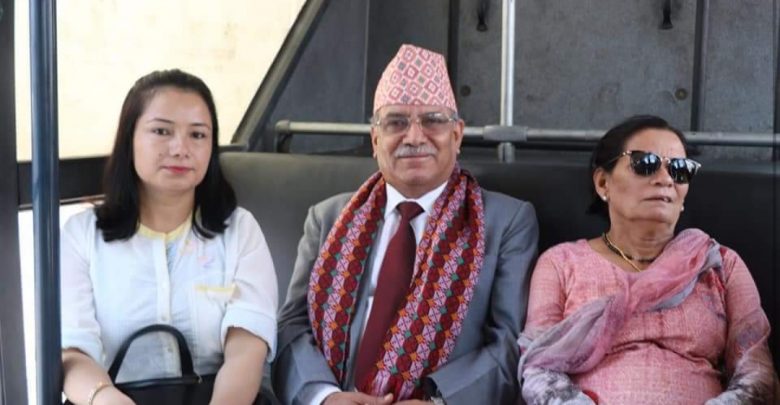