The video features the last scene of Bishnu Bhakta Phuyal when he fell down and was rushed to hospital.

The year started with the sad demise of Bishnu Bhakta Phuyal. The death of senior comedy actor, aged 80, was sudden and surprising as he was performing on-stage while he died. Phuyal died on January 3, 2017 on stage at Rastriya Naachghar. He was pronounced dead when he was rushed to the hospital from the stage. (Read full report and video report here)

In the second week of the year, another sad news came from UK. On January 14 well known an young singer, Anil Adhikari, popularly known as Yama Buddha was found dead at the bathroom of his residence in UK. The singer’s death had been one of the saddest incident of the year.

Towards the end of the first month, 85-years-old singer, Panna Kaji Shakya died. The singer’s one of the popular songs – ‘Tiriri Murali Bajyo’ is still popular among the yesteryears. (Read report here)

The first month of the year was very sad month with three deaths in the entertainment industry. The suicide of Yama Buddha had a biggest impact among the youths. There were various conspiracy theories and some questions are still unanswered.

Mid-way of the year, on July 1, 2017 actress a sudden death of film director and actress Nilu Doma Sherpa was a very sad incident. Nilu died while sleeping at her home. Sherpa was the only film artists who had openly admitted that she was a lesbian. The director of ‘How Funny’ was at the marriage ceremony of Nisha Adhikari on the day before her death.

Dipen Shah – the 19-years-old dwarf artist had died on November 16, 2017. He died of kidney failure. The dwarf artist was suffering from medical problems for some time.

The death of Jal Shah’s mother, Prema Shah was also a very sad incident for the fans of her literary works. Prema shah is better known as a story writer, children literature writer. She died in the US in the last month of 2017. She was living with her daughter Jal Shah in the USA.

The death of Bina Thapa came at the end of the year. The singer, actress, dancer Bina was one of the talented in the bunch with a big career opportunity. Bina’s death in a road accident has been one of the saddest event in the year. 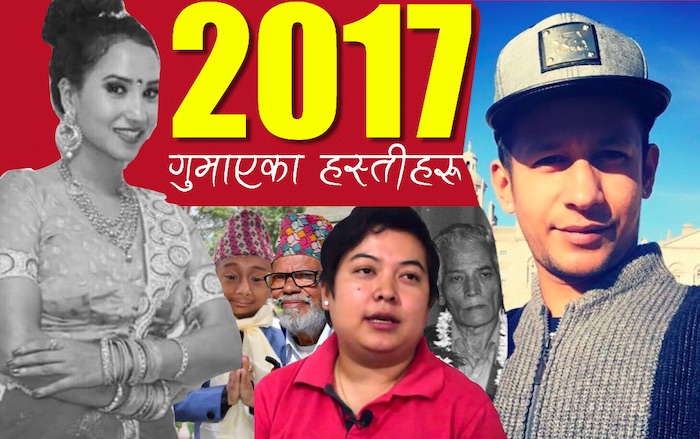