This post was originally written and posted on Oct 31, 2008. I am making an update on the post by adding details how Nepali celebrities celebrate the festival. I have also added a video introduction of the festival. I have included the details of the celebration of three US-return artists of Nepali movie industry:

Actress Jal Shah is in Nepal for Dashain and Tihar this year with her 8-years-old daughter Kalas. She is planning to cook ‘sel’ the sweet bread popular during tihar. Last year, Jal had offered tika to actor Dilip Rayamajhi.

Actor Ramesh Upreti is not celebrating this year because of the death of his grandfather. Although there won’t be Tika and won’t be much fun at home, he will meet and celebrate with his friends.

Ashishma Nakarmi doesn’t have brothers. So, she hasn’t celebrated bhai-tika yet. She enjoys the festival with her friends and family. 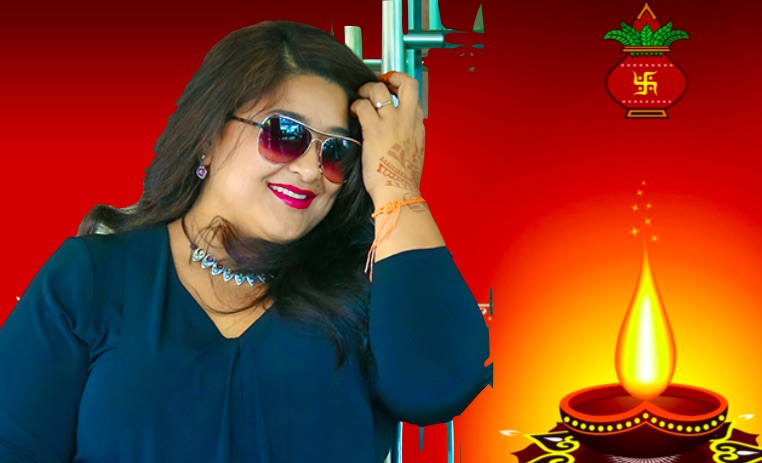 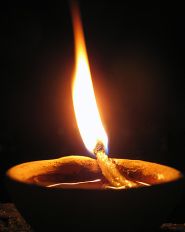 Tihar, second biggest festival in Nepal, is a five-day festival celebrated in late autumn. It is unique in terms of how people celebrate it. One of these days incorporates the Hindu festival Deepavali so it is also called the festival of lights. It also incorporates one of the Nepali community’s New Year (called Nepal Sambat). This festival is also known as ‘Panchak Yama’ which means five days of the underworld lord Yama or Yamaraj.

What makes it unique is the fact that Hindu worship everything including every living beings. It may be due to the notion that when you can’t explain something you worship them. Apart from worshiping crow, dog, and cow people worship themselves too. The final day of the festival is devoted to worshiping brothers and sisters for their long lives. Here is how the five days are celebrated:

On the first day of Tihar, crows are worshiped and fed early in the morning. People leave different food items outside for crows to eat. Crow is considered to be the messenger of death or bad luck. People worship it to bring good luck themselves.

The second day is devoted to the most loyal friend of mankind, the dog. The Kukur Puja (Khicha Puja as Newar community say) is done by a red tika on its forehead and flower garland around the neck.

On the third day people clean their houses and wipe their house with Red Mud (Rato Mato) making a small circle with a Diya (altar) on top starting from the entrance door and drawing a line with the red mud towards the room where we have our Goddess Laxmi. In the morning people worship cow as mother animal representative of goddess Laxmi, goddess of wealth.

In the evening the goddess of wealth Lakshmi is worshiped by lighting numerous lights and lightening works. It is believed that by worshiping Laxmi and pleasing her in return she gives us wealth. 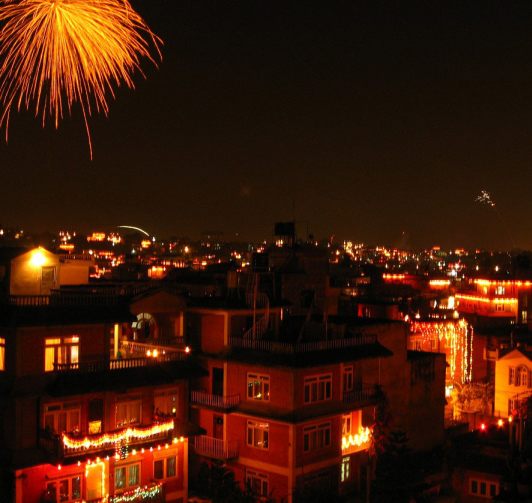 People also tie a string in the cow’s tail which they have worn during the Raksha Bandhan (Raksha bandhan – celebrated in the month of August). It is believed by doing so after our death the cow will help to pull us from hell and will take directly to heaven.

Young girls and women they go door to door singing Bhailani (A special song for Tihar). If a Bhailo groups comes to a house then it is considered auspicious as these groups gives us blessing and good luck. In return people offers them with Selroti (a special kind of Nepali bread which is made during Tihar), sweets and money. Boys and men sing Deusi on the forth day. The custom is similar to trick-or-treating in Halloween.

On the fourth day of Tihar, there are three different known pujas. Most perform Goru Puja, or Worship of Oxen. People who follow Krishna perform Gobardhan Puja, which is worship towards Cowdung. Cowdung is seen as very useful in Nepal, as in the olden days it was used for everything from light at night (Methane) to polish for the mud floors of traditional houses.

Newar community on the night of this day do Maha Puja also known as self-puja. It is done to purify our body. In this puja a Mandap decorated with Saipatri (marigold flower), sweets and fruits and a special Mala (garland) which is made of thread is kept. Each remember of the family has one Mandap. A female member of the family offers the person sitting on the Mandap a Shagun with her hands crossed. Shagun consist usually consist of fried eggs, fruits, sweets, meat, fish, lentil patties. In the left hand with egg and fish and in the right hand Rakshi (Alcohol). This day is also the beginning of Nepal Sambat, or the new year of Nepalese especially commemorated by Newars, it ensures prosperity for the new year.

In the evening many Nepali children and young men go house to house singing Deusi. Deusi is very similar to Bhailo.

The fifth and last day of Tihar is Bhai Tika, a day where sisters put “Tika” on forehead of brothers, to ensure long life and pray to Yamraja for her brother’s long life and prosperity. Then the sisters put Paanch Rangi Tika (Five colored) — Yellow, green, red, blue and white color, offers them Shagun, fruits and sweets and in return the brothers give their sisters gifts or money. On this day, Rani Pokhari Temple (located at central Kathmandu) is opened for those who don’t have any brother or sister. This is the only time in a year the temple is open to general public.