There was a viral photo of some girls wearing lungi – a traditional attire worn by men in India. The story goes like:

A college in Kerala, India recently banned jeans in the college. The girls were irritated by the decision of the college and they decided to go to college in lungi instead. The college is trying to figure out how to response to those girls.

College in Kerala banned jeans. The women came in lungis. The college is still trying to figure out a response to this…! pic.twitter.com/Hnl5XdbgbL

But, the ‘Kerala’ lungi girls viral photo news is totally FAKE although the photo is in doctored. The truth is:

They are NOT college girls but, fans of a South Indian actor, posing for a modelling shot. The photo had been making round in the internet since 2015. It went viral in August 2015, when Mahesh Babuâ€™s film ‘Srimanthudu’ was released. According to a report in an Indian online portal Mid-Day, a group of Mahesh Babu fans from the US had posed for the photo mimicking his lungi avatar. After that it went massively viral on various social media platforms including Twitter, Facebook and Instagram. It is not known if the girls are actually from Kerala or not.

Why did the photo went viral?

A lot of congratulations and support for the girls has poured in whenever somebody shared the photos in online media. That is because, a lot of colleges in India are very conservative. They try to enforce strict fashion codes and restrict people from wearing certain types of attires – usually the latest fashion trends in the school. Most of the youngsters in those colleges are against such dress codes and others are surprised on how backward an education institution can be.

When people see some beautiful girls protesting on what to wear in a college, they tend to like and support the girls. That might have happened to the photo. When different people share the photo, they also associate a college or an incident. For example, some had told that the girls were protesting against “a ban on wearing jeans in their Thiruvananthapuram college”. Given the reputation of being a conservative colleges in Kerala, the fake news make sense because of the credibility boost provided by the college.

I have heard of dress codes being enforced in Nepali schools and colleges. There were “superstar” police officers who used to cut off the long hairs of young boys on street. But, we are yet to witness lungi-girls style viral photos.

'girls wear lungis after jeans were banned in Kerala colleges'? News is, these girls are actually Mahesh Babu Fans. pic.twitter.com/fUcgWk8RTQ 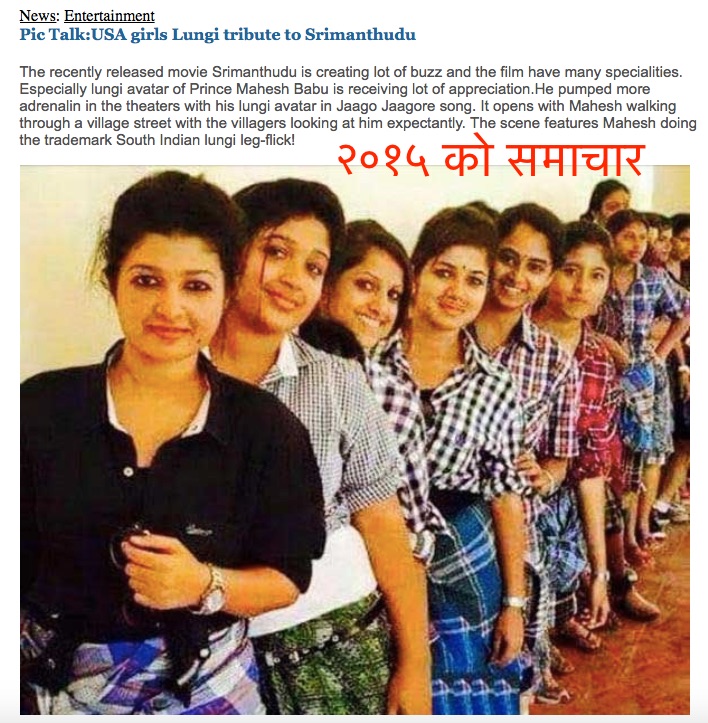