Jharana Thapa the lead actress of the movie used to be one of the preferable actresses for the producers in the past. At the recent time when Jharana doesn’t have a successful movie in her credit, ‘Facebook’ is expected to be helpful in gaining Jharana’s stardom back and help her win the hearts of audiences.

Swatantra Pratap is a new actor in Nepali movie industry and the movie will determine if he will have a future in the industry. Wilson Rai has already won the heart of audiences from his performance in ‘Saayad‘ and the audiences have a high expectation from him. The superstar of Nepali movie industry, Rajesh Hamal is expected to bring in more viewers in the theaters.

The ‘Facebook’ director, Suraj Subba ‘Nalbo’ has shown his talent in some of his successful movies past including ‘Bato Muni Ko Phul’ and ‘Saayad’. Viewers also have high expectation from Nalbo’s story and direction.

The movie is related to social networking site, Facebook and is woven around of a story of youths and the use of Facebook.

The movie ‘Facebook’ is successful in gaining good response from the media. Because of the star cast and pleasant music, Facebook has managed to create buzz in the media and the potential viewers.

There had some criticism on the title for it being borrowed from somebody else’s trademark. Some say, creativity on keeping the title of the movie was lost by naming it ‘Facebook’. It was also criticized for stealing the design of the poster of an English movie ‘Gamer’.

Based on the pre-release response, the movie is expected to start with a good opening. 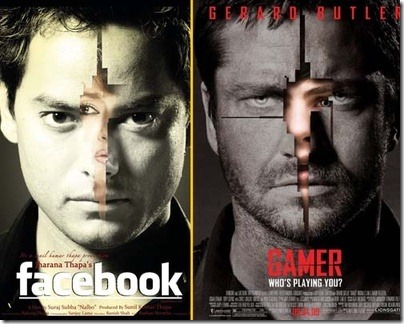