A 2011 release Nepali movie ‘Gurudakshina’ is a presentation of Creative manakamana Films and Micro Vision Entertainment. The movie is made on the story of Rammani Subedi and screenplay/dialogue of Subash Singh Basnet. The music are composed by Dipa Narayan Jha and Basanta Sapkota. Playback singers are Udit Narayan Jha, Dipa Jha, Shiv Pariyar, Anand Raj Anand, and Bhauli on the song written by Rammani Subedi, Amrit Kumar Sharma and Prakash Subedi. The choreographers are Bijay Nakarmi and Kabiraj Gatraj. Cinematographer is Chunamani Aryal and background score is prepared by Manoj Raj Bhandari.

The movie is a multi-starrer movie featuring superstars like Rajesh Hamal, Ramit Dhungana, Sanchita Luitel and Raj Ballav Koirala. The hot model and actress Sushma Karki is alos an attraction of the movie. Others in the movie include Shyam Aryal, Sarita Giri and Rabi Giri.

Raj Ballav Koirala has stopped acting after moving to the USA. Ramit is also not seen in movies these days. Rajesh Hamal has also slow downed signing up movies. Actress Sanchita Luitel is trying to make successful comeback like her husband Nikhil Upreti. Sushma Karki hasn’t been successful in getting more movies. 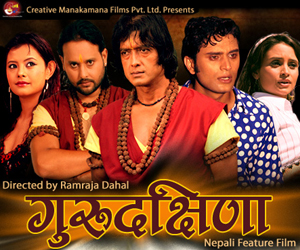