As usual, a lot of Nepali movies were released this year. But, none of them could do excellent business either within or out of Kathmandu. Last year, there were some really good movies like Kaha Bhetiyela by Shree Krishna Shrestha and Shiva Regmi. Kaha Bhetiyala did an excellent business all over Nepal. But this year, Nepali film industry didn’t see such blockbuster movie. We expected a few movies to leave their impression. But, all of them didn’t live up-to the expectation.

In the starting of the year, viewers and film makers were hopeful on the movies made by experienced directors and the media was also full of movie news. In the media, in contrast to the usual trend, Nepali movies got more coverage than Nepali music, this year. Some of the things that the viewers look forward to were the comeback of Manisha Koirala and MaHa -duo after a long absence from the Nepali movie industry. This year also saw the comeback of Jharana Bajracharya.

In the Nepali new year (2010, April), Rekha Thapa released her movie Hifajat featuring Aryan Sigdel. The movie did a good business. Glamour and exposure of Rekha Thapa had worked for this movie and was successful in attracting the youth to the theatre. In addition to that, good music, story and Gyanendra Deuja’s direction can be attributed to the success of the movie. Some Hidu extremists tried to create a controversy on to a dress Rekha Thapa wore in the movie. Rekha promotion tactics coupled with the controversy helped the movie in positive ways. A poster of Hifajat, a direct copy form a Hollywood movie was also much talked about during the time.

Musical blockbuster movie Takkar Dui Mutuko by Rose Rana released at the same time did an average business. Rose’s involvement in forcing girls to dance in his bars and his arrest made more news than the movie itself. 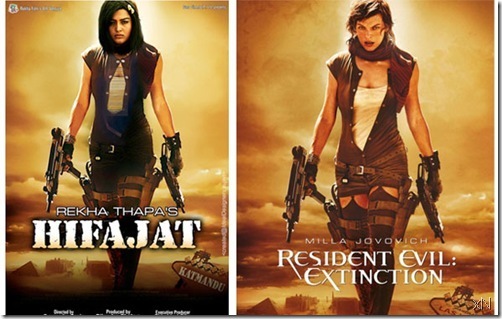 Than a love story, First Love, directed by Simosh Sunuwar was released. Simosh’s first movie Mission Paisa wasn’t that successful. That was why people didn’t have high expectation from First Love either. But, this movie did an unexpected business inside Kathmandu valley.

In contrast, highly awaited Alok Nembang movie, Kohi Mero, couldn’t do the magic it was expected to do. Extensive publicity and media coverage on Jharana Bajracharya’s comeback and Alok’s previous success couldn’t help the movie. 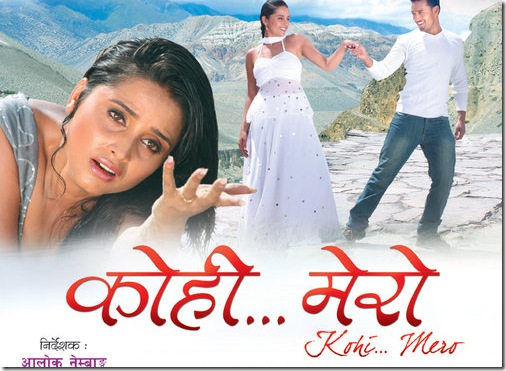