A new hashtag #BlockadeWasCrimeMrModi is trending in Twitter and Facebook. As the visit of Indian Prime Minister Narendra Modi nears, frustration among Nepali people is in rise. Most of the Nepali people have considered Modi the main person behind inhuman economic blockade when the country was fighting agains natural disaster. The blockade was imposed right after the 2015 Earthquake that killed more than 9,000 people and destroyed thousands of houses.

While welcoming Modi against general public sentiments, the Oli government might undo all the good deeds it has done recently. The failure of public bus syndicate was one of the most praiseworthy job of the current government. Now, the focus has shifted from the government stance against unfair business practice to Indian PM’s visit.

According to reports, during his two-day state visit to Nepal starting May 11, the Indian Prime Minister, Narendra Modi, will announce three separate “surprise gifts” for Kathmandu, Janakpur and Muktinath Temple.

The first of the gifts will be announced on May 11 in Janakpur. Janakpur is said to be connected to India’s Ramayan Circuit – a direct link from Janakpur to Ayodhya. After Janakpur, Modi will visit Kathmandu to meet PM KP Sharma Oli. He will visit Muktinath Temple to offer prayers and will probably announce another of the gifts to restore the temple. His visit to the temple has also been controversial because of the closure of the Annapurna circuit trekking route for three days, in view of Modi’s May 11 visit.

If Prime Minister Modi really wants to restore India’s relations with Nepal to its potentials, he must apologize for India’s coercive diplomacy that resulted into five month long blockade at the Indo-Nepal border causing immense economic, political and psychological loss to Nepal 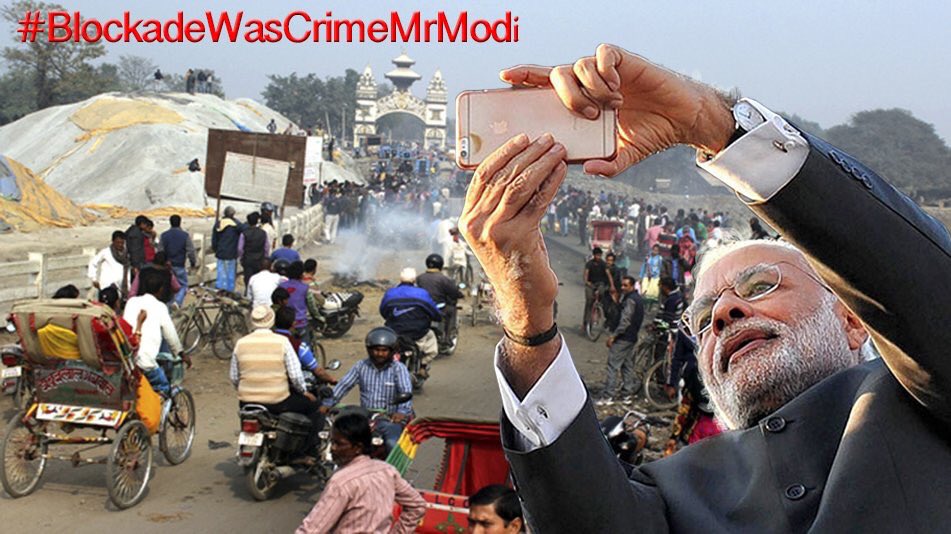 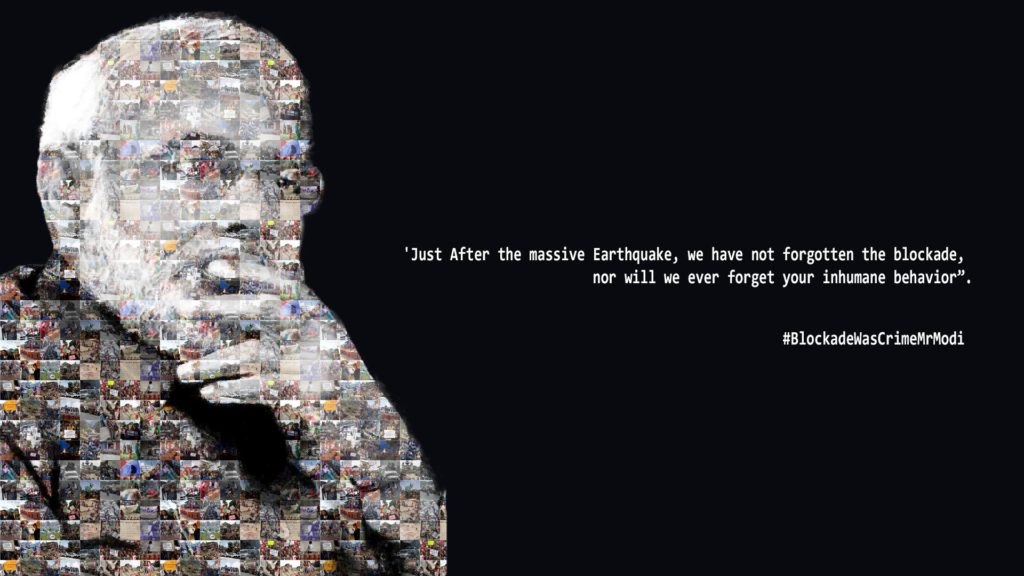 Not to disrespect yet no reason to respect: 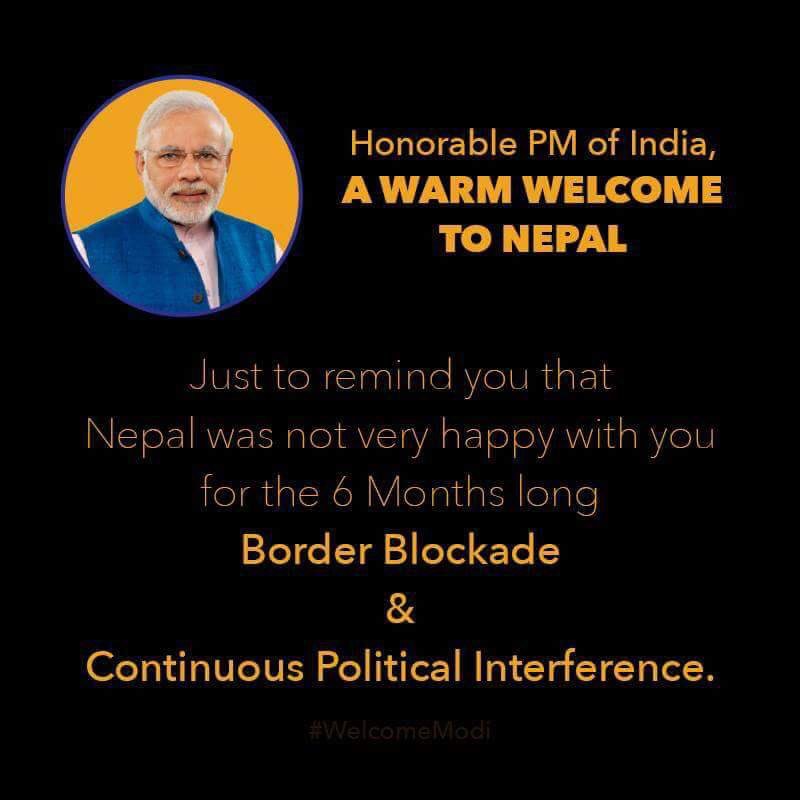 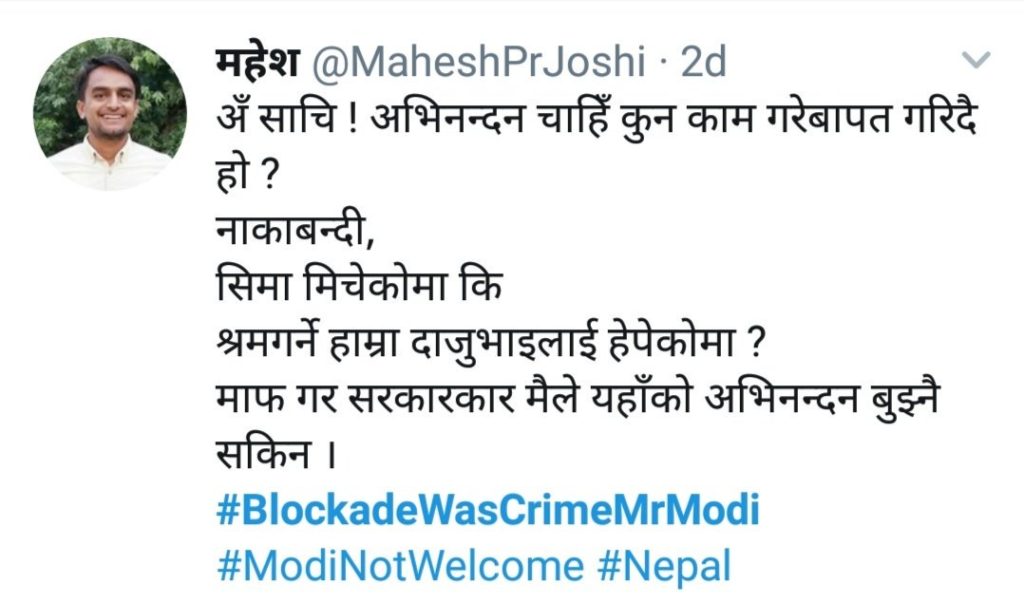 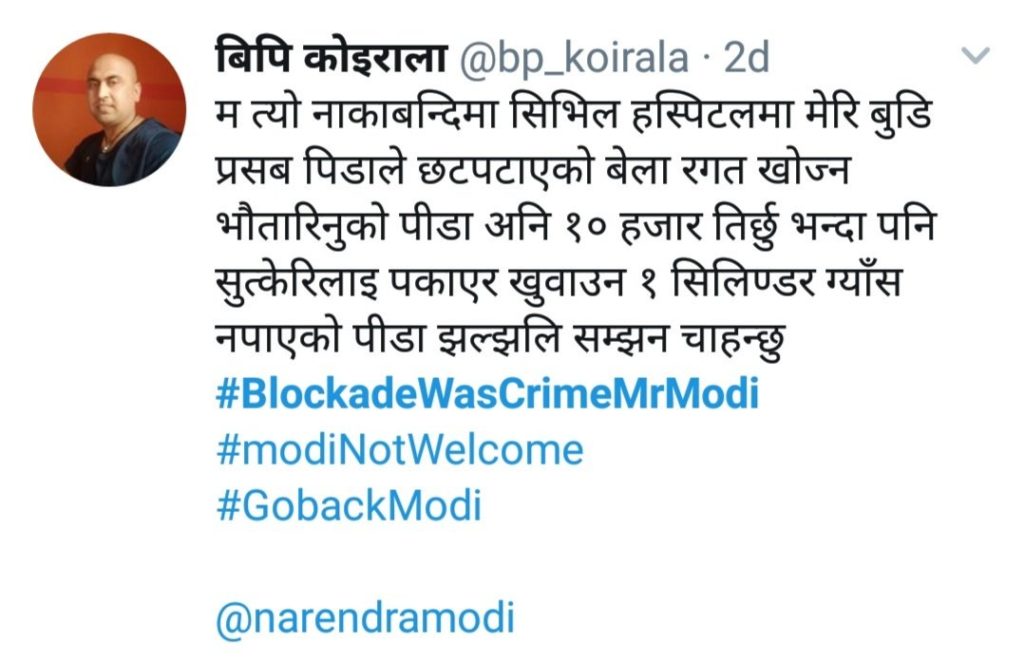 There is a fundamental difference between welcome and flattery. Flattery is insincere, unnatural and abnormal praise, not actually welcoming someone with pleasure in a natural manner. Unnatural circumstances created in the name of welcome. Damned !! #BlockadeWasCrimeMrModi

Indian News : Modi promises to provide 3 gifts to Nepal
Me : Blockade, Constant interference n fake promises was good enough, we dont want anything from him #BlockadeWasCrimeMrModi

Mr. PM of India, imagine not being able to feed a 6 month old because you can't cook and waking up at 3 am, because power would be available for 4 hours, just to cook.
we lived like in stone ages. #BlockadeWasCrimeMrModi

Nepalis will never forget Indian blockade of 2015 and yes >#BlockadeWasCrimeMrModi .. i hope PM Modi will apologise to Nepalis for this but don't believe it will happen.. however we have to move forward now and hence we shld welcome visit of PM Modi to Nepal