‘My Life‘ is a Nepali movie produced by the Unlimited Dreams and Biwash Ghale and directed by Jeewan Rashaili. By observing the promo of the movie, one can say that it is targeted to the young generation. The movie is made in digital format and is being distributed by Digital Cinema Nepal.

According to the director, Jeewan Rashaili, who had spoken in various media, my life is a revenge thriller love story which is different from other movies in its technical aspects. He also added that he has tried to use special effects in the movie for the entertainment of the viewers. The movie is basically is about love story of youths and revenge.

Target audience and their pre-release response

The movie received some negative comments ahead of it’s release because of the fact that it’s poster was also a copying of a poster of a Hollywood movie ‘Valkyrie‘. The negative comments on the poster has however helped the movie to get some publicity in social media.

It is seen that the promo of the movie hasn’t created any buzz among youths yet. That might be because of the lack of new dialogues or good songs in the promo video. As the director, Jeewan Rashaili, has previously directed and edited more than 40 music videos, we can expect a technically good movie. But, judging from the current response of the audience, the movie will need some really good reviews from critics and viewers after it’s release.

The movie doesn’t have a website but has got a Facebook Profile. You can post your views about the movie on its fan page and convey your message directly to the film makers. Total investment of the movie is told to be 55 lakhs and the movie is planed to be released in 45 theatres across Nepal. 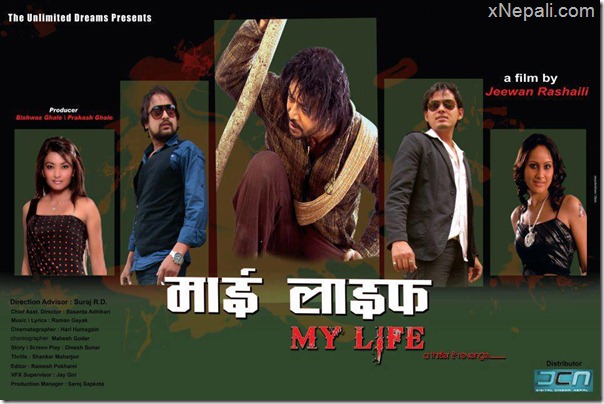 3 thoughts on “Pre-Release Review – My Life”