This week three movies were released on Friday. Nawal Nepal directed movie ‘Mangalam’, Yam Thapa’s movie ‘Hurrey’ and Ganesh Dev Pandey directional movie ‘Ganja Baja’. Out of the three movies, two of them are comedy genre movie and another social and love story movie. Because of the success of comedy films in these days, a lot of producers have been producing comedy films. It seems, people are more inclined towards non-comedy films. Two of the most recent successful movies – ‘Kri’ and ‘Kanchhi’ both were non-comedy films.

According to reports, ‘Mangalam’ has received a lot of viewers. The film produced by one of the most successful producers of Nepali film industry, Chhabi Raj Ojha, is being supported by his ex-wife Rekha Thapa. Rekha also told that it was her “own film.” She also appreciated the work of the director, two new actors and actress Shilpa Pokharel. Other viewers have also told that the movie is heart touching. Rekha says, ‘Even if you have never cried watching films, this film will make you cry.” But, I think, Rekha didn’t sound any critical and the appreciation remark seem to be motivated by something other than the film itself.

Chhabi Raj Ojha has told that he had tried to capture the multiplex cinema market with ‘Loafer’. But, the movie failed and this is the second time he has attempted to attract young audience and has been quite successful.
Watch my video report:

Regarding the two comedy movies, ‘Hurrey’ has got more viewers than that in ‘Ganja Baja’. The producer of ‘Hurrey has told that those who watched the film have liked it. The trailer of the film has got almost a million viewers:

The song ‘Theki Ma Dahi’ has received in excess of 2 million views.

About Ganja Baja, the movie didn’t get much viewers. Those what watch the film belong to the new age kids. The trailer of the film is not much popular in YouTube. 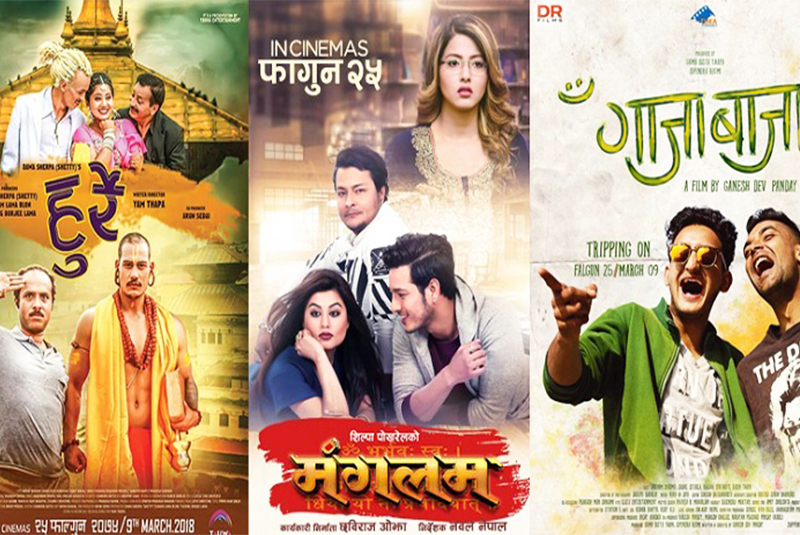