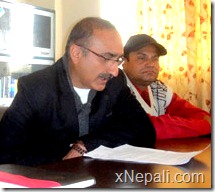 Film Development Board of Nepal has unveiled a 10-point-document outlining its rules and regulation for the development of movie making in Nepal. The rules were distributed to the journalists in a press meet organized on Monday, March 12, 2012.

Note: Following is unofficial translation of Nepali text (attached below)