The domain name provider of WikiLeaks, EveryDNS.net, has said that it has terminated the wikileaks.org domain as the domain has come under massive cyber attacks. As the website started releasing more than 250,000 diplomatic cables, the pressure against the whistle-blowing organization has been increasing from all over the world. The website is renamed wikileaks.ch (a Swiss domain).

The website now features a message "Keep us strong help wikileaks keep governments open," beside a photo of its founder Julian Assange. 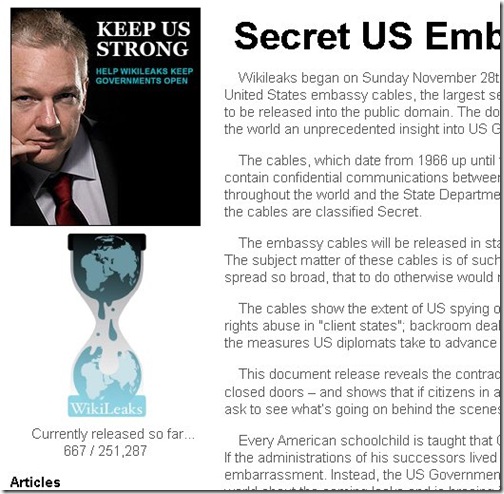 Yesterday, the US server, Amazon.com had pulled the plug of the website and it had to move to European servers.

Amazon’s press release does not accord with the facts on public record. It is one thing to be cowardly. Another to lie about it.

Wikileaks has anticipated one more avenue to be blocked in the near future — in Twitter. Earlier today, there was zero in Twitter "following’ and now it is ‘1’.