Rekha Thapa’s movie, produced by actress Chhulthim Gurung, Nepali movie ‘Diarry’ is special for Rekha Thapa’s fans. That is because, Rekha is featured in a negative role for the first time in her entire acting career. The movie directed by Anil Yonjan also introduces Sunny Singh, a new actor. At the time the characters played by Chhulthim and Sunny Singh were in deep love, actress Rekha Thapa is featured as a villain. 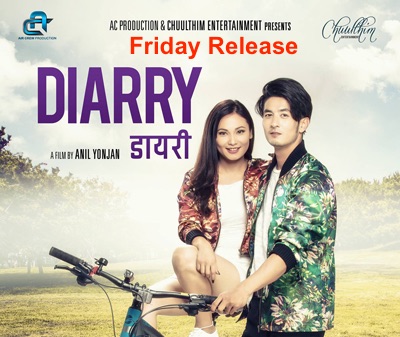 When actress Chhulthim Gurung debuted in ‘November Rain’ as a character Dalli, she was liked by the viewers. After that she rejected all the acting offers and decided to produce her own movie. She is featured in the leading role in ‘Diarry’. With Rekha, Chhulthim and Sunny Singh other actors in the movie are Dinesh DC, Rajkumar Upreti, Binod Poudel and others.

Actor Nikhil Upreti is apparently running away from his first wife Kopila Upreti. When Nikhil Upreti’s first wife, Kopila Upreti showed up unannounced during the announcement of Nikhil’s next movie ‘Commitment 60 hours’, he was really shocked. While Kopila wanted have a talk with him, Nikhil wasn’t in the mood to meet her. He asked his assistants to shoo her away.

Kopila wasn’t event allowed into the program. By the way she was being treated, it was clear that Nikhil and Kopila are not having a good time these days.

A few days ago, Nikhil had celebrated birthday at the maternal home of his second wife, Sanchita Luitel and their children.

END_OF_DOCUMENT_TOKEN_TO_BE_REPLACED

A presentation of Abhimanyu Dixit, ‘Chasing Rainbow’ is an art movie that was also the winner of Jury Award at TNFF 2014. The movie is named ‘Nepali independent cinema’ – a name given for it not being a commercial production. The director Sahara Sharma is also the writer and the cinematographer of the movie. Saurav Rajbhandari is the assistant director. Samman Timilsana is the production manager. Music is composed by Bishal Shrestha, Coudoury, Top and Kutumba. The producer and the editor Abhimanyu Dixit has also written the screenplay of the movie. Coudory has done Runaway, Kutumba has done Utsav, Freedom, Utpatti, Farewell, Parivartan, Topi has done Koshish, Bishal Shrestha has done Someday, Nischal Basnet has done ‘Udreo Choli’ and Dr. Bigyan Raj Gyawali has done ‘Invaision’.