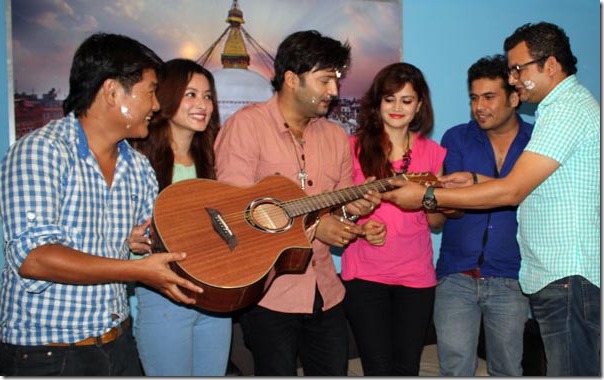 On Shrawan 20, the birthday party was a surprise party for Aryan. On the party, Aryan told that his wife Sapana Bhandari had surprised him at mid-night by asking him to cut his birthday cake.

In addition to the birthday celebration at TV Filmy, the team of the upcoming movie ‘Classic’ also celebrated the birthday of its lead actor. During the celebration, Aryan was gifted a guitar. After receiving the gift, Aryan promised to learn to play the instrument.

Aryan wife, Sapana was also with Aryan in the birthday celebration. The movie previously scheduled to start the shooting in Baisakh was delayed after the earthquake of April 25. The movie features Aryan as a blind singer. Actress Namrata Shrestha is going to be featured opposite to Aryan in the movie. Dinesh Raut is directing the movie. Last year’s release ‘November Rain’ (watch ‘November Rain’ here) also features Aryan and Namrata in leading role and the movie was also directed by Dinesh Raut. The movie was one of the few successful movies in the year.