In the past, when you call Karishma Manandhar an “uneducated actress”, she would respond in anger. Now, the situation has changed. She accepts, she is uneducated and she is doing all she can to change that. She had lived her whole life being tagged “uneducated”.

But, Karishma had always taken the accusation a challenge. A 6th grade passed actress (she was in grade 7 when she stared acting). She never appeared in grade 7 exam. In the Nepali education system, where English language teaching starts at grade 4, Karishma had only studied English for 2 years. The same Karishma went to the USA, studied English language and wrote articles in her personal blog (it is sad, I didn’t save her blog posts at that time. I couldn’t find any saved archives of her blog yet.) When I read her posts at that time, she seemed to be well in command of the language. She passed the English language test to get the Green Card. It is another story that, she might have relinquished the card now.

Karishma Manandhar is a history in herself. She has faced the struggle nobody else in the Nepali film industry might have faced. She is a fighter who knows how to take the right step and succeed in what she does.

At the time she started acting, she knew she didn’t know acting. She realized her shortcoming despite of the success of her first film. Her first film ‘Santaan’ was a super hit film. The movie made Bhuwan KC popular and Karishma was also appreciated for her work in the film. But, Karishma knew, she didn’t know acting. The success of the film was a pure pure luck and the effort of the noted director Prakash Thapa.

So, she went to India to take acting training. She devoted herself in learning. An uneducated actress took the huge step because there were no training institute in Nepal. Indian film makers were also attracted by her beauty. They offered role in Bollywood films. But, she didn’t get the best offers and she wasn’t happy by the films in India. So, she returned back to struggle in the Nepali film industry.

Soon, she became the number one actress in the film industry. It was only after she started producing her own films, she became fed up of the celebrity lifestyle. She wanted to get free of the pressure and the stress.

So, she left her husband at home and took her daughter Kabita with her to the USA. Kabita studied in the USA and has completed her Bachelor’s degree. 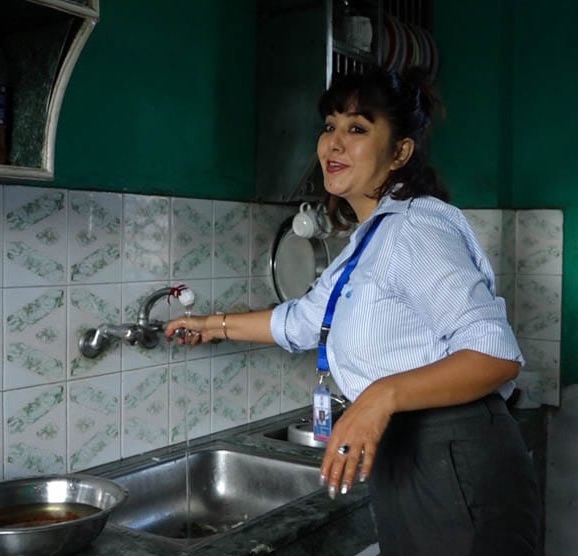