Understanding Nepali film industry is not easy. I am confused when somebody asks about the strongest star-power actor in Nepali film industry. In fact, there is none! Neither Rajesh Hamal‘s action nor Rekha Thapa‘s exposure can be a sure-shot of success.

But, in case of Bhuwan KC, there seems to be a consensus among media people that, he makes movies that do good business. Although it might not be true for all the movies Bhuwan KC has done as an actor, but the movies he had produced so far had been successful commercially.

It has been about a decade since Bhuwan KC started making movies. From his first production "Sapana" to his his last released movie "Ma Timi Bina Marihalchu", all of the movies had done a decent business. In fact, "Ma Timi Bina Marihalchu" had scored the highest box office collection in that year. That might be the reason behind the confidence that can be seen on his face and words before the release of his movies.

I think, the reason behind his confidence are:

After three years, Bhuwan KC is coming back with his new home production movie "Sathi ma Timro" and people are wondering if he will be able to re-create the success of his previous movies.

At this time, the competitive situation in Nepali movie industry has changed with the entry of new talents. For example, This year’s most successful movie so far, "Loot", is still doing great in theaters across Nepal. Almost everybody in the movie "Loot" are  fresh and they have shown their talent. It is possible that Bhuwan’s new movie may be financially successful, conquering the box-office collection seems like a long shot.

We need to wait a few more weeks to see if the controversial actor has a trick up his sleeve or not. 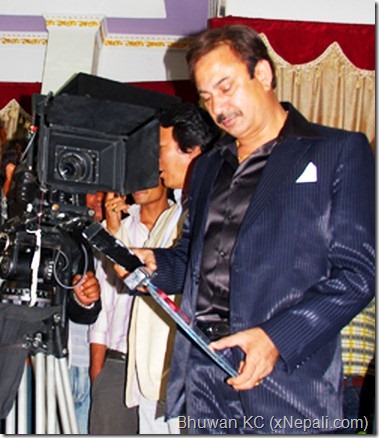 2 thoughts on “Does Bhuwan KC still have the competitive advantage?”