The earthquake of June 7, 1255 AD (1310 BS) is the first recorded earthquake in the history of Nepal. During the earthquake nearly one third of the total population of Kathmandu were killed. Among the killed were the King of Kathmandu valley, Abahya Malla. The earthquake magnitude at that time is believed to be around 7.7 in Richter scale. 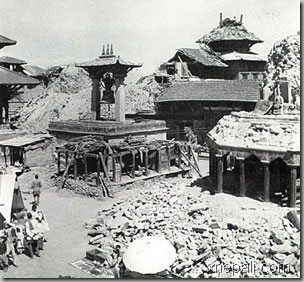 Mangalbazar, Patan destruction during the earthquake of 1934 (1990BS) 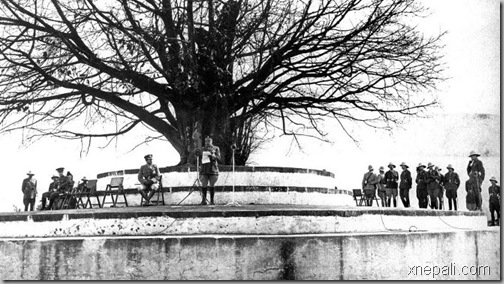 The prime minister, Judda Shamsher J. B. Rana announcing the relief efforts during the earthquake of 1934

In August (or September) of 1408 AD (1463BS), during the reign of king Shyam singh, a major earthquake destroyed the temple of Rato Matchendranath and many other buildings and temples.

Very little information is available about the earthquake that happened in December of 1681 AD (or January of 1682) i.e. 1737BS. King Sri Niwas Malla ruled at the time.

In the months
of June and July of 1767 AD an earthquake of significant intensity was felt in Nepal. Much information about the earthquake is not available.

In the earthquake that happened in May/June of 1810 AD (1866 BS) many buildings and temples were damaged. Loss of lives was limited to a few but it was told to comprise of twenty one shocks and aftershocks. The King Girban Yudha Bikram Shah was ruling Nepal at that time. 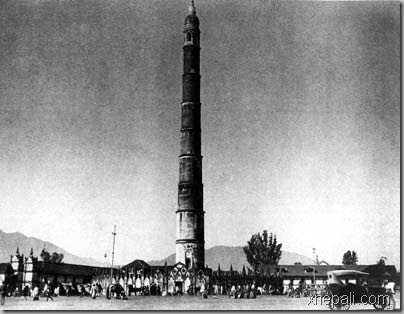 Pre-Earthquake Dharahara before being destructed by the 1934 AD earthquake.

In the year 1823 (1880 BS) seventeen shocks and aftershocks were of various magnitudes were felt in Katmandu valley. There howev
er was no report of loss of human lives.

In the months of August or September of 1833 AD (1890 BS), two major earthquake hit Kathmandu valley. It was during the reign King Rajendra Bikram Shah Dharaha, the tallest building in valley, was also severely damaged. The first shock was felt at around 6 pm and the second one was around 11 pm in the night. The second shock was the deadliest as most of the valley residents were asleep. Numerous houses, temples, and public shelters had collapsed during the earthquake. Thimi and Bhaktapur were completly destroyed. It was reported that 4214 houses were collapsed in Kathmandu Valley. All over the country 18000 houses were reported to have collapsed. 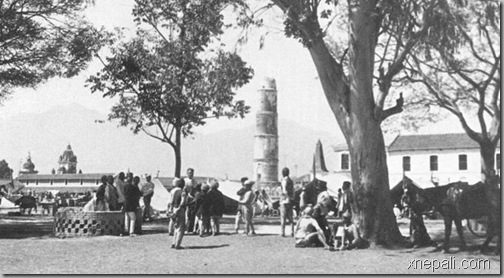 Post-Earthquake Dharahara broken down during the earthquake of 1933.

During June and July of 1834 AD (1891 BS) four major earthquakes were reported. Although this earthquake was less severe when compared to the earlier year’s earthquake, the rain during the earthquake caused flooding in Bagmati River – washing bridges and sweeping crops planted on the fields near the river banks. 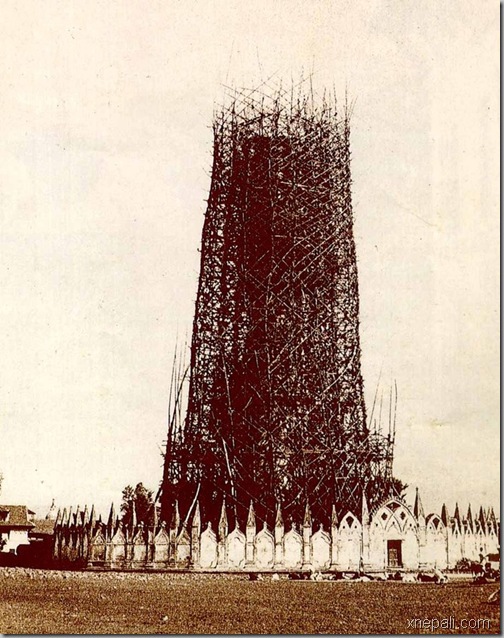 Renovation works going on on Dharahara

An earthquake in 1974 (2031 BS) wasn’t that severe as only one building was ereported to have destroyed in Nuwakot during the earthquake. Another earthquake of 6.5 Richter scale happened in 1980 (2037 BS) that affected the far western region of Nepal. The most affected districts included Baitadi, Bajhang, and Darchula. In the earthquake 125 people died, 248 were seriously injured, 11,604 buildings were destroyed, 13,414 buildings were damaged. A heavy loss of livestock was also reported. 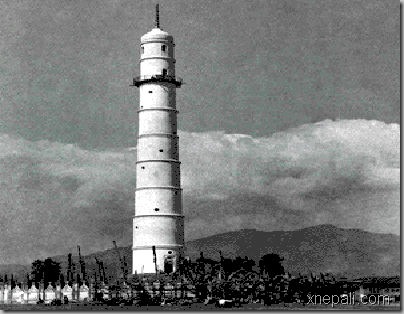 After-Earthquake Dharahara after re-construction in 1956. The whitewashing work is on its final stage.

The earthquake of 1988 AD ( 2045 BS), known as Udayapur Earthquake mainly affected the Eastern Development Region and some parts of Central Development region. It caused 721 deaths, 6553 injured, and damage to 64174 private buildings, 468 public houses, 790 government buildings. Death of 1566 live stocks and a total direct loss of 5 billion rupees was reported. The World Bank provided a loan of NRs. 1 billion to the affected people.

A feast for the poor in Tundikhel, hosted by Chandra Shumshere JB Rana after his return from Britain in around 1910 AD. Pre-earthquake Dharahara can be seen in the background.

[The dates are given in AD and local Bikram Sambat (BS). Sources – NSET, various Facebook and Twitter posts]