Although Gyanendra had told that he was ready to take the leadership role, she hasn’t shown any sign of leadership. A leader is a person who consolidate people in a group and motivate it to follow him/her. But, Gyanendra isn’t seen doing that. It seems, he is doing the opposite. The party that supported him, Rastriya Prajatantra Party, got divided into two parties. One of them joined the ruling party, Nepali Congress and is running election in association with the party. Nepali Congress is one of the main force that had ended monarchy in Nepal.

The party, RPP, in itself is a very small party and it doesn’t have much support of the people. In top of that, the party is divided in if it should support the ex-king or not. So, there is a very little support to Gyanendra in the party. The people seem to support ex-king rather than the political parties. But, when it comes to leading them, they don’t believe the ex-king to be any better than the parties.

The fact that RPP joined hand with Nepali Congress to participate in the election is enough of a proof that there is a little political relevance of the ex-king. 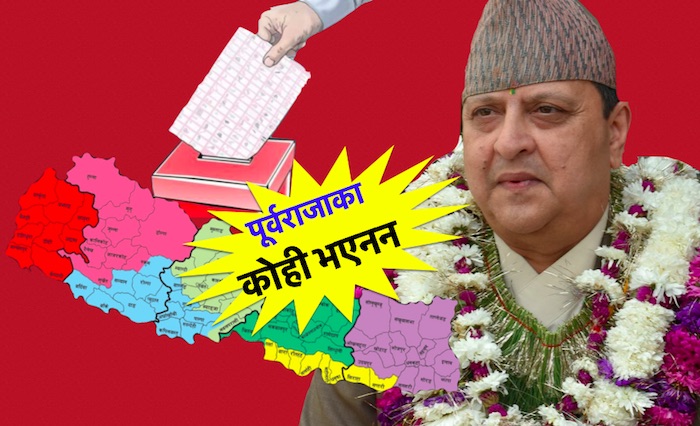 Where are top leaders contending?

The prime minister Sher Bahadur Deuba is running in the election in his stronghold, Dadeldhura. The leader of the opposition party, CPN UML, KP Sharma Oli is also running in his stronghold – Jhapa 5. Nepali congress has teamed up with other smaller parties like RPP to participate in election. The Communist parties have also teamed up for the election purpose. CPN Maoist and CPN UML are the two biggest parties in the coalition.

The leaders and their respective constituencies are:
Nepali Congress party leaders:

Singer Komal Oli left RPP and joined CPN UML party. But, when the party failed to give her an opportunity to participate in election, she has registered herself as an independent candidate.

There are about 4,600 candidates in the election out of which 1,742 are the parliament member candidates and 2,966 candidates are contesting for the Pradesh Sabha.